Magic Johnson is happily married to Earletha Kelly (a.k.a Cookie Johnson). The couple married on the 14th of September 1991.

The wedding took place in Lansing. The wedding was attended by the guests including Thomas, Aguirre, and Herb Williams.

Together, the couple is blessed with two children including a daughter, Elisa Johnson, and a son, EJ Johnson (b. 4th of June 1992).

EJ is a TV Personality and socialite. He came out as openly gay. Also, he stars the reality TV show, Rich Kids of Beverly Hills.

Previously, he was in a relationship with Melissa Mitchell. With Melissa, he has a son, Andre Johnson (b. 1981). Andre is a making director of the Magic Johnson Enterprises. 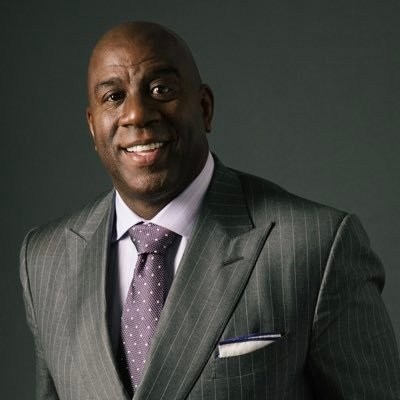 All kids need is a little help, a little hope and somebody who believes in them

I tell you, it's funny because the only time I think about HIV is when I have to take my medicine twice a day.

Who is Magic Johnson?

Magic Johnson is a hall of frame-induced former professional basketball player and businessman. He is renowned for playing for the Los Angeles Lakers as the point guard.

In 2009, the magazine, Ebony named him America’s most influential black businessman. Also, he happens to be the co-owner of the Lakers and an investor of the Los Angeles Dodgers and Los Angeles Sparks.

Magic Johnson was born on the 14th of August 1959 in Lansing, Michigan to Earvin Johnson Sr. and Christine Johnson. His birth name is Earvin Johnson Jr.

His father, Earvin used to work as an assembly worker at General Motors. He has six siblings; Pearl, Quincy, Larry, Lois, Yvonne, and Kim. Also, he has three half-siblings, Evelyn, Mary, and Michael Johnson.

Talking about childhood, he was greatly influenced by her parents’ work of ethics. Also, he used to help her parents by collecting the garbage. Due to this reason, his neighborhood children used to call him, Garbage Man.

At the same time, he fell in love with basketball. Also, he used to admire the basketball player, Bill Russell. When he was in grade 8, he became one of the dominant players in junior high. Later, he joined the Everett High School. However, he intended to join Sexton High School.

During the second year, he set the record with a triple-double of 36 points with 18 rebounds and 16 assists. In the final year, he led his High School to state championship games with a 27-1 win record.

After completing High School, he joined Michigan State in East Lansing to become a television commentator. In college, he played with players like Greg Kelser, Jay Vicent, and Mike Berkovich. As a freshman, he completed the season with 17.0 points on average, including 7.9 rebounds, and 7.4 assists.

In 1979, Los Angeles Lakers drafted Magic Johnson into the team. At the time, he played alongside the player, Kareem Abdul-Jabbar. In the NBS All-Rookie Team, he scored an average score of 18 points along with 7.7 rebounds, and 7.3 assists.

The following year, he missed 45 games due to torn cartilage. Moving forward, he signed a 25-year contract with the Lakers worth $25 million making him the highest-paid player in the entire history at the time.

The following season, Laker went to the finals for the third time in a row. However, the team lost with a score of 124-121 as Johnson couldn’t get the shot before the final buzzer.

As time passes, he grew into one of the strongest players in the NBA. During the 1991-92 NBA season, he was discovered to be positive for HIV. On the 7th of November 1991, he took retirement by making a public announcement.

Despite the fact, that he took retirement, in 1992, he was chosen to play for the US Basketball team in Barcelona 1992 Summer Olympics.

After his retirement, he published his book, Safe Sex, and worked as a commentator for NBC. Also, he founded the Magic Johnson Foundation. In 1993, he made his comeback as a coach replacing the coach Randy Pfund and Bill Bertka.

Besides that, he also works on the hot-of-the-night talk show, The Magic Hour on Fox Network. Apart from that, he also runs various business ventures including the Magic Johnson Enterprise worth $700 million. On the 21st of 2017, he became the president of the basketball operation for the Los Angeles Lakers.

On the 9th of April 2019, he resigned from the post and became the NBA ambassador.

As of 2022, he has an estimated net worth of $1 billion. Details on his salary are not available. However, the major source of his income is his business ventures.

Magic Johnson has black eyes with clean-shaven hair. He stands at a height of 6 feet 9 inches and weighs around 100 kg.

Recently, he received a temporary restraining order from a man named Willie Frazier. He mentioned that Willie has been harassing him and his employees for years.

You may also read the bio of Tony Bennett, Lamelo Ball, and Marisa Miller.