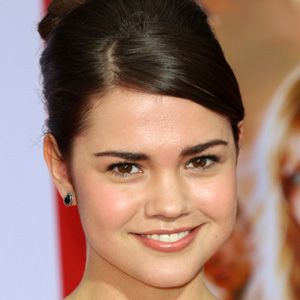 I personally want to come across as authentic and real. I don't judge anyone.

I get on social media sometimes. I think it's good to find a balance and to be able to put your phone down.

I'm trying hard to keep my Australian accent. My mom would disown me if I didn't.

Maia Mitchell has been in a relationship with Viner and musician, Rudy Mancuso since 2015. The couple confirmed their relationship via Rudy’s Instagram post in March 2016. Later, that year, they were rumored to be part away since they have not seen together.

However, they surprised their fan by posting their pictures on Instagram in 2017 and giving a strong message that they are on good terms with each other. Also, in April 2018, they were seen together holding hands.

Who is Maia Mitchell?

Maia Mitchell is a versatile Australian actress and singer best known for her roles as Natasha Ham in ‘Trapped’ in 2008 and as Brittany Flune in ‘Mortified’ in 2006. Furthermore, she currently stars in the Freeform’s drama series, ‘The Fosters’ as Callie Adams Foster.

She made her big screen debut in Teen Beach Movie, which is a Disney Channel Original movie.

Maia Mitchell was born in Lismore, New South Wales, Australia. Maia’s father, Alex Mitchell, is a taxi driver where her mother, Jill Mitchell, works in the education system. She has one younger brother, Charlie.

Mitchell is of Australian nationality and of Caucasian ethnicity. From her early life, she was into acting, popular culture and music hence learned playing guitar.

She was educated from Trinity Catholic College, Lismore. Along with her academics, she did acting in school plays and local theatre productions.

Also read: Biography of Naomi Watts and know he family, education, relationships, net worth and many more.

Mitchell started her acting skills by performing in school plays and also in local theatre productions. She got her big break at age 12 as Brittany Flune, in the Australian children’s television series ‘Mortified’ which ended after 26 episodes in May 2007. late, this success helped her to get starring roles in Australian TV series like trapped and it’s sequel Castaway along with popular TV series, K-9.

She then moved to the US and started her film career from Disney Channel movie. Teen Bech Movie and later with reprising role in ‘Teen Beach Movie 2′. furthermore, she starred in popular Freeform drama series The Fosters as Callie Adams Foster from 2013 to 218 and her performance has been praised.

She has an estimated net worth of $3 million.

Maia Mitchell was involved in controversy when she along with Rudy Mancuso released their new song titled “Sirens’. This song’s lyrics and melodies are similar to that of Eisley’s ‘Ambulance’ which was first noted by drummer Darren King who is married to the vocalist of Eisey, Stacy Dupree. Before this controversy heated, later, the duo give credits to original song in their video.

Also Read: Biograph of Nicky Whelan and her ethnicity, body measurements, relationships, and many more.

Mitchell has a curvaceous body with 34-24-34 inches of measurements. Her hair and eyes both are dark browns. she fits in 8 (AU) dress size and 8.5 (AU) shoe size. furthermore, she has a decent height of 5 feet 6 inches and a weight of 54kg.