Canadian actress and part-time gamer. The public noticed her for appearing in a comedy-drama series, Never Have I Ever.

Maitreyi Ramakrishnan’s relationship at present is possibly single. The details of her current or past boyfriend/affair are not revealed. 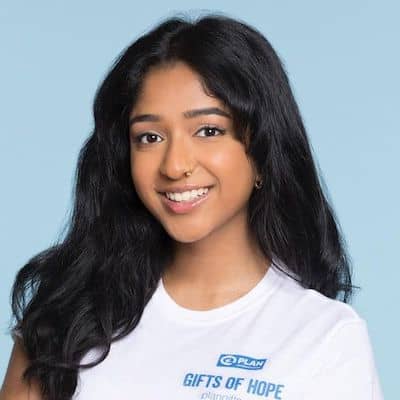 My identity isn't being Sri Lankan. That's not my country. My country is Canada. But my culture is definitely Tamil.

Who is Maitreyi Ramakrishnan?

Maitreyi Ramakrishnan is a Canadian actress and part-time gamer. The public noticed her for appearing in a comedy-drama series, Never Have I Ever.

For her work, she got nomination for Independent Spirit Award and Canadian Screen Awards in 2021.

She was born on 28 Dec 2001 in Mississauga, Canada. The name of her mother is Kiruthiha Kulendiren and her father’s name is Ram Selvarajah.

Maitreyi’s ancestry is Tamil and has an older brother named Vishwaa Ramakrishnan.

Talking about her academics, she has attended Meadowvale Secondary School.

Maitreyi Ramakrishnan is popular for her acting as she has appeared in a 2020’s Netflix comedy series, Never Have I Ever. She was selected among 15ooo participants for the role of Devi Vishwakumar.

Her character and acting are loved and appreciated by the audience. The other main casts of the series are Darren Barnet, Poorna Jagannathan, etc.

She was also seen as Olivia in an episode of Acting for a Cause (2020). Moreover, Maitreyi as herself appeared in A Little Late with Lilly Singh (2021), Sidewalks Entertainment (2020), and more.

This Netflix actress is keeping herself away from rumors and is also not surrounded by any desperate scandals.

Regarding Maitreyi Ramakrishnan’s body features, her height is 5 ft 6 inches and her body weight is 40 kg.

Moreover, her eyes are dark brown, her hair is black, and has a brown skin complexion.

Maitreyi is available on social sites. She has Instagram and Twitter accounts with more than 1.3m and 48k followers respectively.

But she is also active on the Facebook platform with more than 6.3k followers.

Francesca Annis
Tags : Acting for a Cause Actress Never Have I Ever