The 14 yr actor is young enough to be in any relationship as of now.

Malachi is more focused on pursuing his career. However, he shared a good friendship bond with his formal co-actors. 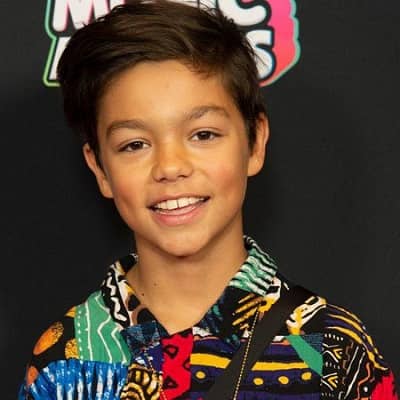 Who is Malachi Barton?

Malachi Barton is one of the well-known rising stars of the entertainment industry. The 14 yrs old actor is passionately pursuing his acting career.

He is represented by Los Angeles-based Primary Wave Entertainment.

Malachi was born on March 10, 2007, in Virginia Beach, Virginia, USA. His ancestry is of Old English origin.

His father’s name is Loren Barton who is a musician and guitarist. Likewise, his mother Felicia Barton is a singer. She has also taken part in American Idol in 2009.

Malachi seems to share a close bond with his parents. He frequently shares posts with them. They are often seen having family outings and vacations.

He has a younger brother who was cast alongside him in the McDonald’s commercial.

As per his age, the actor must be attending high school education. However, its details are not available as of now.

Malachi began his acting career when he was just 4 yrs old. He worked in various commercials before he appeared on the big screen. The actor has worked for various ads for McDonald’s, Kmart, and  Lay’s Chips.

Malachi has also worked for different television series such as See Dad Run, Instant Mom, Disney Channel Stars: DuckTales Theme Song. The actor debuted in the movie from the year 2014.

His career took a turn and Malachi came to the limelight after he portrayed Beast Diaz in Disney Channel’s Stuck in the Middle. After that, he portrayed Jasper Flores in Bunk’d, and no sooner appear as Tyber in Just Roll With It.

His recent work was appearing for Dancing with the Stars and also in Dora the Explorer.

The child actor has already had a half-million value of total assets. Similarly, his earning is around $20 thousand per episode for his appearance.

Being a child actor, his salary is around $50-$100 per hour, so he also might be receiving his salary in the same range.

The actor is more focused on building his career right now. He doesn’t get involved in any of the controversial activities in the media.

Malachi stands with a height of 4 feet and 7 in. Likely his weight is around 45 kg as of now. It will be increasing as per his age.

Talking more about his appearance, he has dark brown colored hair and eyes.