Malandra Burrows is an actress and singer. She is lowkey about her affair presently. 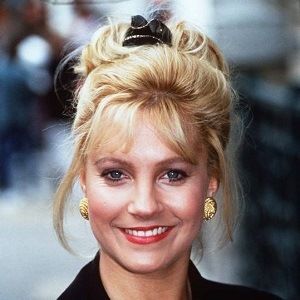 Talking about her relationship, she dated Ian Sharrock from 1985 but the relationship didn’t go well so they decided to break up in 1989.

Then, she dated Darren Day in 1994, but the relationship didn’t go well so they broke up.

Malandra Burrows is an English actress and singer, she is well known for her long-running role as Kathy Glover in ITV soap opera Emmerdale. In addition, she has also appeared on Yorkshire Television’s Junior Showtime at the age of six.

Malandra was born in Woolton, Liverpool, Merseyside, England on November 4, 1965. She has not mentioned his parents’ names on social media.

Additionally, there is no information about her siblings. In addition, she belongs to British nationality and English ethnicity. Her birth sign is Scorpio.

Talking about her education, she attended King David High School in Childwall. Similarly, she joined the Everyman Youth Theatre in Liverpool, did classes at Liverpool Theatre School, and also did productions with a local amateur dramatics company at St Peter’s, in Woolton,

On talking about her profession, she played several roles on television, appearing in The Practice and Fell Tiger, as well as taking two parts in the Channel 4 soap opera Brookside – firstly Lucy Coflins’ schoolfriend, Sue, and then Lisa Morrissey, the girlfriend of Pat Hancock, in 1982.

Besides that, she has had some success in the UK Singles Chart, reaching number 11 with the song “Just This Side of Love” in 1990. Likewise, she released a self-penned single “Summernight Love” (1996) on AATW/DKAM Records.

During 2006 she also appeared on Channel 5’s The All-Star Talent Show, coming fifth as a Fire Eater. Later, she also starred as the Fairy during Christmas 2007, in “Sleeping Beauty” at the Pavilion Theatre, Bournemouth.

Moreover, she entered late into the 2006 series of I’m a Celebrity… Get Me Out of Here! on day seven. She was found hanging from a tightrope and had to be rescued as part of the trial by Matt Willis and Lauren Booth. Hence, on her first night, she had to sleep in a hammock and fell out of it.

Then, she took part in several “Bushtucker trials” most notably one dubbed “Skyscraper”. Each pair of flags, collected in numerical order equaled a much-needed meal for camp.

On talking about her net worth is $1-$5 Million, she has not revealed her current salary yet.

Malandra has not been part of any notable controversies in her career. Currently, she is far from rumors and controversies.

Malandra’s hair color is blonde and her eye color is blue. Her height is 5 feet 4 inches and weighs 83 kg. Her shoe and dress sizes, etc. are disclosed.

Also, read the affair, salary, the net worth, controversy, and the bio of Emma Atkins, Leah Bracknell, Claire King