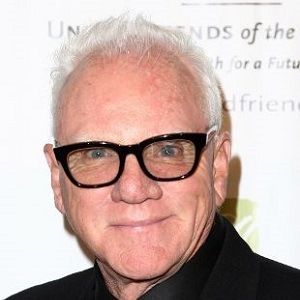 The best thing I did was abuse myself when younger - I dabbled in everything, cocaine, booze, women - because now I don't have to do it anymore.

It's a remarkable film that has survived as such a classic and I'd be a raving idiot not to be thrilled with that.

He didn't want me at first, told me about the big-name actor he could get, how he was taller than I was - I'm five eight and a half - but I said, "That's nothing, I can stand on a box."

I got to be the hero in that one. It's a very whimsical part, a wonderful part, H.G. running after Jack the Ripper (David Warner) and meeting this modern woman (Mary Steenburgen). Of course, it's very special to me because I met Mary, we got married, and we had two children. Even though we're not together now, she is the mother of my children and that film is where we met. It's also a damn good film!

Malcolm McDowell was earlier married to actress/publicist Margot Bennett from April 21, 1975, to September 15,  1980.

Hardly a few days after divorcing her, he went on to marry actress, Mary Steenburgen on September 29, 1980. The couple had two children, Lilly Amanda, and Charles Malcolm, before divorcing on October 1, 1990.

Currently, the English actor is married to Kelley Kuhr on November 12, 1991, who is 24 years younger than him. The couple has three sons: Beckett Taylor, Finnian Anderson, and Seamus Hudson.

Who is Malcolm McDowell?

Malcolm McDowell is an English actor primarily known for playing rowdy and villainous roles. In a career spanning over five decades, he has done a wide variety of film roles.

Malcolm McDowell was born in Horsforth, West Riding of Yorkshire, England on June 13, 1943. His birth name is  Malcolm John Taylor and he is currently 77 years old.

Talking about Malcolm’s education history, he was sent to the Tunbridge Boarding School and later attended the Cannock House School in Eltham, Kent.

As a schoolboy, he realized his passion for acting. He enrolled at the London Academy of Music and Dramatic Arts (LAMDA) to study acting professionally.

Talking about his profession, Malcolm McDowell made his film debut as Mick Travis in Lindsay Anderson’s ‘If…’ that was released in 1968. He then appeared in the films ‘Figures in a Landscape’, ‘The Raging Moon’, and ‘A Clockwork Orange’ in the early 1970s. He reprised his role as Mick Travis in ‘O Lucky Man’ and then third film in the trilogy titled ‘Britannia Hospital’.

Malcolm starred as F.E. Cochrane in the action flick ‘Blue Thunder’ in 1983. In the same year, he played Reggie Wanker in ‘Get Crazy’ and also appeared as Wolf in Faerie Tale Theatre’s rendition of the “Little Red Riding Hood”. The English actor narrated a documentary titled ‘The Compleat Beatles’ in 1984.

In the year 1985, he did the TV movies ‘Arthur the King’ and ‘Gulag’. A year later, he appeared as Christopher Quinn in the TV film ‘Monte Carlo’. After this, he was cast in the movies ‘The Caller’, ‘Buy & Cell’, ‘Sunset’, and ‘Mortacci’.

In the year 1992, McDowell appeared as Hubert Bailey in the movie ‘Chain of Desire’. Two years later, he played mad scientist Dr. Tolian Soran in ‘Star Trek Generations’. During 1994, he also did the TV movie ‘The Man Who Wouldn’t Die’.

He next starred in the science fiction/action-comedy flick ‘Tank Girl’ in 1995. In the year 1996, he joined the cast of the television series ‘Wing Commander Academy’ as Commodore Geoffrey Tolwyn.

In the late 1990s, the actor played voice roles in the animated series ‘Captain Simian & the Space Monkeys’, ‘Can of Worms’ and ‘Superman: The Animated Series’. He had a brief but memorable role as a gangster in the British crime movie ‘Gangster No. 1’ in 2000. That year, McDowell also did the movie ‘I’ll Sleep When I’m Dead’.

In 2003-04, he appeared in two episodes of ‘Teen Titans’. After this, he portrayed Jonas Slaughter on ‘Law & Order: Criminal Intent’. In 2007, he began playing the role of Mr. Linderman in NBC’s ‘Heroes’. That year, he also appeared as Dr. Samuel Loomis in ‘Halloween’. In the same year, he was featured in an episode of ‘Masters of Science Fiction’ on Sky.

Additionally, McDowell did the rock and roll film ‘Suck’ in 2009. In December the same year, he had a guest appearance in Slipknot’s music video “Snuff”. Two years later, he played Satan in the comedy thriller flick ‘Suing the Devil’. At around the same period, he was also cast as Stanton Infeld in TNT’s series ‘Franklin & Bash’.

He acted in the horror films ‘Vamps’ and ‘Silent Hill: Revelation’. McDowell next starred in the short film ‘Cowboys & Engines’ in 2013. The same year, he played King Henry II in the movie ‘Richard the Lionheart’.

In 2015-16, he appeared as Cloud/Priest/Fart Philosopher in the adult animated series ‘TripTank’. During this time period, he also voiced Dr. Monty in the video games ‘Call of Duty: Black Ops III’ and ‘Call of Duty: Revelations’. In addition, the actor portrayed Father Murder in the film ‘31’ during this time.

In the year 2017, he played voice roles in the animated sitcoms ‘Jeff & Some Aliens’ and ‘We Bare Bears’. The following year, he voiced the character of ‘Minister Hydan’ in the series ‘Star Wars Rebels.’

He won The Life Career Award at Special Award, he won Best Actor for Bereave (2015) at Jury Award. Likewise, he won Evilenko (2004) at European Silver Ribbon Award. Similarly, he won Lead Actor for The Employer (2013) at L.A. Indie Award.

She has an estimated net worth of around $70 million (as per 2020 data) and she has earned that sum of money from her professional career.

He recognized for the controversial roles of Caligula in Tinto Brass’s ‘Caligula’, DeLarge in the movie ‘A Clockwork Orange’, and Mick Travis in Lindsay Anderson’s trilogy consisting of ‘If…’, ‘O Lucky Man’ and ‘Britannia Hospital’.

Malcolm McDowell has a height of 5 feet 9 inches. Additionally, he weighs is unknown. Malcolm’s hair color is grey and his eye color is blue.