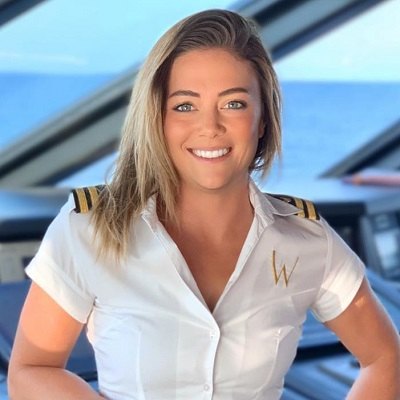 Malia White is currently in a relationship with a man named Tom Checketts. Her boyfriend, Tom is a Yacht head chef.

The couple started dating back in 2019. Malia often shares her pictures with the chef. Last, they went to travel Franch. Before that, they explored Amsterdam together.

Previously, Malia dated her colleague, Wes Walton. They date around one and a half years and parted their ways with break up.

Prior to that, she was in a relationship with the chef, Adam Clicks too.

Who is Malia White?

American Malia White is a diving instructor and reality TV star. White is renowned as the crew member of the Bravo’s reality TV series, Below Deck Mediterranean.

Malia White was born on the 20th of July 1990 in Florida, United States. She is of British-Scottish-Irish ethnicity

Till the date, she has not shared any details about her father, mother, and siblings. However, her father used to work for the Boatyard. Also, she shared the picture of her mother on the occasion of the Mother’s day

Talking about the educational background, she completed her High School education from a local High School in Florida.

In the earlier days, Malia White enjoyed her childhood days with her father in the boat. Later, she turned her hobby into her professional career and started her journey as a ship crew. Also, she was involved as a diving instructor too.

However, she first came in the limelight after appearing in the second season of Bravo’s reality TV series, Below Deck Mediterranean as a deckhand. Moving forward, she left the show after the season.

In 2020, she is making her appearance in the 5th season of the show as a bosun.

Besides that, she also makes through her reality TV appearances too that ranges from $48k to $60k yearly.

Her reappearance in Bravo’s reality TV series, Below Deck Mediterranean stirred some questions regarding her qualification.

Back in the 2nd season, she appeared in the series as a deckhand. However, she left the show after the series. Currently, she is appearing in the 5th season of the series as bosun. Due to that, some of the fans of the show questioned that is she qualified for the position?

Later, the show’s captain, Sandy Yawn responded through her Twitter account mentioning that she is more than ready to be on the position.

Malia White is a hazel-eyed blonde. She stands at a height of 5 feet 4 inches and weighs around 56 kg.

Talking about the appearance, she has a sharp look with an oval-shaped facial structure.

On the account, she is following the personalities like Captain Lee Rosbach, Kate, Chastain, and Erin Sullivan.