Malik Beasley is an American well-known professional basketball player.  He is popular as the player for the Denver Nuggets of the National Basketball Association (NBA). Malik is currently playing for Sioux Falls Skyforce of the NBA Development League. He plays from guard position wearing a jersey number 17. He is in a relationship.

Reflecting on the personal life of Malik Beasley, he is in a love relationship. This talented player is dating model Montana Helena Klein Yao.

This couple is soon be blessed with a child. On Jan 1, 2019, Montana shared an Instagram video revealing her baby bump. 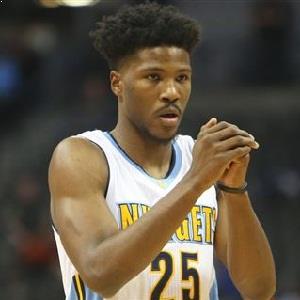 Who is Malik Beasley?

Malik Beasley is an American well-known professional basketball player.  He is popular as the player for Denver Nuggets of National Basketball Association (NBA). Malik is currently playing for Sioux Falls Skyforce of the NBA Development League. He plays from guard position wearing a jersey number 17.

Malik Beasley was born in Atlanta, Georgia on 26 November 1996. He is of African American ethnicity and has American nationality.

He is the son of Michael and Deena Beasley. His father was also a professional basketball player and as an influence, he has built up a strong interest in basketball sport.

Beasley attended Saint Francis School where he was named the Class 1A Player of the Year of the state of Georgia and All-State Class A First Team. Later on, he joined Florida State but soon declared for NBA draft forgoing his final three years of college eligibility.

In his debut game, he failed to record any points for the team, playing for eight minutes in the game. On 10 November, he came to fame after when he recorded a score of 12 points in a match against Golden State Warriors. He was assigned multiple times to the Sioux Falls Skyforce of the NBA Development League as per the flexible assignment rule.

Till the date, Beasley hasn’t signed and traded to any other teams. He is still playing for the Denver Nuggets wearing a jersey number 17.

Malik Beasley: Salary and Net Worth

According to the sources, Malik earns a basic salary of $1,773,840. However, there is no information about his net worth.


Unlike other players, he hasn’t been in any rumors but he was criticized for his playing in Florida State.

Malik Beasley has a height of 6 feet 5 inches. his body weighs 89kg. Malik has black hair and black eyes.