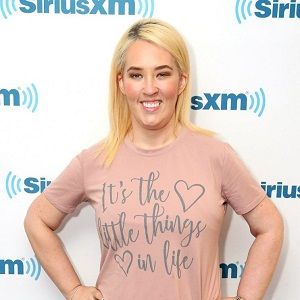 June is in a relationship as of now. She is having an affair with Geno Doak. They are living together from the year 2016.

Previously, she dated Mike ‘Sugar Bear’ Thompson since May 14, 2004. They have a daughter together named, Alana Honey Boo Boo Thompson born in 2005. In September 2014, the couple called it quits.

Apart from this relationship, she has been into several other relationships in the past. Back in the 90’s, she was in a relationship with two different people one after another. She has children with both of them. She gave birth to her first child in 1995 named, Anna ‘Chickadee’ Shannon.

Similarly, in 1997, she gave birth to Jessica ‘Chubbs’ Shannon. She has one more child with an unknown man. The child was born in 2000 named, Lauryn ‘Pumpkin’ Shannon.

Who is Mama June Shannon?

Georgia-born Mama June Shannon is the mother of famous child star Alana ‘Honey Boo Boo’ Thompson. Additionally, she is a TV personality and a public figure.

Presently, she is a prominent figure in the media for her appearance in her own family reality show. The show is named, Here Comes Honey Boo Boo. It premiered from 2012 to 2014. Previously, she appeared on TLC’s Toddlers & Tiaras with her daughter Alana.

June was born in the city of McIntyre in the state of Georgia on August 10, 1979. June possesses American nationality and ethnicity is North American.

Her birth name is June Shannon. There is no information on her parents and siblings.

During her mid-teenage period, she gave birth to a child. There isn’t quite a lot of information regarding her early life and her childhood.

As per her education or academic education, there is no information available too.

June is a famous TV star. Discussing her TV career, she rose to fame after appearing on a TV show with her daughter. She starred in a TV show, “Toddlers & Tiaras” with her daughter, Alana. Afterward, she starred in her own family reality TV series. The series premiered from 2012 to 2014. The name of the show is “Here Comes Honey Boo Boo”. These are the very little TV shows she has done until now.

She has a net worth of $1 million but her salary is not revealed yet.

In March 2018, she has been arrested for intaking illegal drug, cocaine post feud with her boyfriend Geno Doak at a gas station.

June is part of many controversies till now. Back in 2008, she got arrested for attempted theft. Additionally, people criticized her for feeding her children the “road kill” foods in the past. Presently, in April 2017, she is making headlines with her bra-less avatar in the street.

Mama June has a healthy body with a height of 5 feet 4. She has blonde hair and blue eye color. Her dress size is 4(US). In August 2017, she was in headlines for losing 300 pounds weight. She became size 4(US) from size 12(US). Her shoe size is unknown.

Mama June flaunts her curved body in an Iconic Baywatch Swimsuit after the weight loss; Scroll to know the journey of her amazing weight loss