(Real State, CEO and President of The Khoshbin, Businessman) 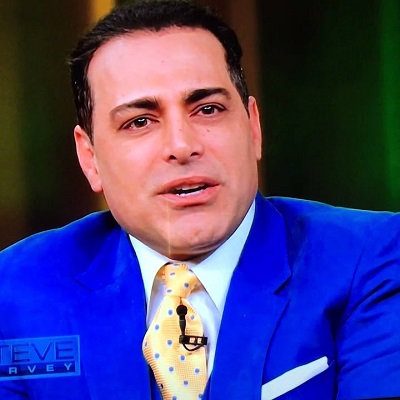 ''Dreams become reality when passion and persistence meet.'' ''If you want it bad enough in life in life then you will find the way somehow to get it.'' ''Donot let negative thoughts consume you! Block them immediately and think of a blessing in your life and be grateful! always stay positive because positive thinking brings positive results'' ''If you are giving it all you have got, then its no longer a question of question IF but rather WHEN!.'' ''There were years when all I had was a positive mind.''

Manny Khhosbin is happily married to his spouse Leyla Milani. They both got married in 2011. Milani is a well-known Iranian-Canadian model, entrepreneur, television personality, and actress. Together they have two children, a son named Enzo Pesha and a daughter named Priscilla.

The couple first met in 2009. The two got married just after a couple of years of dating. It was reported that they enjoyed their second honeymoon at the St. Regis Bora Bora Resort. He currently lives in Newport Coast, California along with his spouse and two kids.

Who is Manny Khoshbin?

Italian businessman Manny Khoshbin is a famous real estate, President and CEO of The Khosbhin Company. He is recognized as one of the most successful names in the world of business.

The early days in the United States were really challenging and full of difficulty for him. He didn’t know the English language and had no friends. He had a tough upbringing as his family did not have any possessions by the time they got to America. However, he didn’t let his weakness to stop him from chasing his goals.

He went to West Miner high school. While in high school, Manny started selling used goods at swap meets on the weekends to make a few bucks. He graduated from high school in 1989 and then first worked at the K-Mart company where he worked as a cart pusher where he was responsible for collecting the shopping carts as well as cleaning them. He got $3.15 per hour in the job.

Career of Manny Khoshbin as a businessman

At a young age, he started looking for job opportunities and found a multi-level marketing firm selling bags of nuts and candies door-to-door. In the first two months of his job, he became the highest-earning salesman in the company.

He was 18 years old when he started his own business. Actually, while he was shopping at Price Club (now Costco) with his father, Manny realized all the goods he was selling were sold in bulk for much cheaper than what his employer was charging him.

He then opened a small office and purchased a full pallet of nuts and candies along with polyester bags, labels, a scale, and a sealer. He was doing really well by selling his nuts and candies to auto retail and service centers until he was forced to shut down because of notice by the health department regarding the packaging of the food products.

In 1991, at the age of 20, he got an opportunity to purchase a gas station with just a 10% down payment. The business deal was brought by one of his father’s friend who was a real state and a broker. He jumped into the opportunity by investing his all savings. Unfortunately, the loan company offering the low down payment funding turned out to be a scam.

In 1992, Manny obtained his real estate license in 1992. He began working for a mortgage company as a loan officer. In 2004,  he started Koshbin Company which climbed the ladder of success. It is well known in the United States.

Now he is the CEO and president of The Khoshbin Company. He expanded his real estate business in seven states, in a total of 2.5 million square feet area.

He has also written his book named Manny Khoshbin’s Contrarian PlayBook: How to Build Your $100 Million Real Estate Portfolio From the Ground Up, in 2011 where he has shared his journey.

As of 2019, his net worth is around $80 million and is still growing. He lives a luxury life. He has a passion for exotic supercars. In 2019, he bought $2.2 million on Koenigsegg, the fastest street-legal car in the world which he owned just for five months.

Along with luxurious cars, he owns his private yachts and jets. He recently brought a $229 million, a multi-level office building with two restaurants on the main floors.

He has around 1.8 million followers on his Instagram account which is also an important source of his income. He runs self- titled youtube channel with 1.07 million subscribers and he has over 399.6k followers Facebook.

You may also know about the early life, net worth, and body measurements of Kurt Rappaport, Yaron Varsano, Dave Hester.