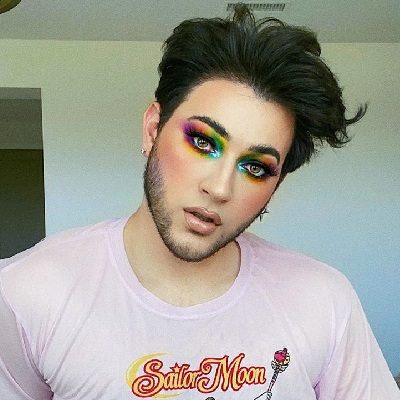 Manny MUA’s current relationship status is possibly single. Till the date, he has not introduced anybody as his love partner.

However, his YouTube and Instagram followers got queries regarding his relationship status with the film director, kyle Krieger back in 2017.

The question arose when they kiss during a YouTube video, CHAPSTICK CHALLENGE WITH KYLE KRIEGER!. Later, he explained that he is not dating the film director as he has his own dating life.

As of now, he is focused on his career and not dating anybody.

Who is Manny MUA?

Manny is also the first male band ambassador of Maybelline. Also, he is the founder of the cosmetics brand, Lunar Beauty.

Manny MUA was born as Manuel Gutierrez on the 4th of April 1991 in San Diego, California.

His father, Manny Gutierrez Sr. and mother, Greka Gutierrez has often featured his YouTube channel. They are of British-Irish ethnicity.

He is the eldest among his two siblings; Nick and Aaron Gutierrez.

Talking about the educational background, he graduated from San Diego State University with Honors in Health science.

Initially, he planned to go to medical school and became a plastic surgeon. However, he started exploring social media as a beauty influencer in his career.

Before being a YouTube personality, Manny MUA started his career as a makeup artist in the salons of San Diego including the Sephora an MAC. Meanwhile, he became a friend with the Instagram star, Patrick Simondac. Along with the guidance of Patrick, he started posting on Instagram.

In 2014, he created his own YouTube channel for sharing his beauty tips, tricks, and many more. With his content, in 2017, he earned around 2 million subscribers on the channel.

Also, he got extremely popular on Instagram too. The same year, he was announced as the brand ambassador of Maybelline making him the first male ambassador for the brand.

Also, he was chosen to be a spokesperson for the brand making him the second among the male after, James Charles. Moving forwards, the following year, he launched his own beauty brand, Lunar Beauty. Also, Forbes named him as 30 under 30 in the Arts and Styles category.

Apart from that, he also makes through brand promotion via his YouTube and Instagram accounts. Also, his net worth has significant contributions via his cosmetics brand, Lunar Beauty. As of now, he is expanding his career with the brand as a beauty influencer.

Back, in 2017, Black Moon Cosmetics sued him and his friend, Jeffree Star for copyright and trademark infringement. Before that, the duo announced a collaboration with the star’s makeup brand. Black Moon accused them of using its logo with permission.

Later. the matter with resolved without any buzz in the media.

Manny MUA has black eyes with black hair. His height is 6 feet and has a decent weight. Also, his chest size is 42 inches, waist size is 32 inches and biceps is 14 inches.

His main YouTube channel has around 4.79 million subscribers. Also, he has a secondary vlogging channel with more than 87.9k subscribers.

You may also read the bio of Jackson Mecham, Kate Elizabeth, and Eileen De Freest.