Manu Ginobili is married to Marianela Orno. The couple got married in 2004. They have three sons, twins Dante and Nicola and the youngest, Luca. The couple lives a happy married life in San Francisco to the present days. 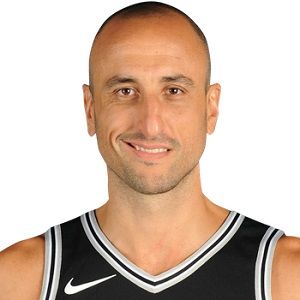 I have dreams inside of me, and I have a chance to make them true

Once you're in the game, you forget about everything

You never know what will be expected of you, so you just go out and play

I want to win championship. That's the think I enjoy most

I know my game. I know what I like to do.

Who is Manu Ginobili?

Emanuel David Manu Ginobili is a professional basketball player from Bahia Blanca, Argentina. He is one of the members of the Big Three of the San Antonio Spurs. The Big Three comprises Tim Duncan, Tony Parker, and Manu. He continues to play with the Spurs to the present day.

Manu Ginobili’s or Emanuel David Manu Ginobili was born on July 28, 1977, in Bahia Blanca, Argentina.  Currently, he is 44 years old. He comes from a family of professional basketball players. He is the youngest child of Jorge and Raquel Ginobili. Jorge was a manager at Bahiense del Norte. He has two brothers Leonardo and Sebastian. His passion for basketball started at the early age of six.

One of the NBA players who never made it to college, Manu Ginobili was too busy with his career he never had time for school or college.

In 1995, Manu started his professional career with La Roja at the Argentine Basketball. He was traded to the  Estudiantes Bahia Blanca of the Argentinian League the next year. He signed the 1998-99 season with Basket Viola Reggio Calabria in Italy. Together with his teammates, Manu helped the Reggio’s to be ranked to the 1st division from its former 2nd division in Italy.

In 2003, Argentina won the gold medals in basketball as Manu led the team Argentina to the finals. Manu recently signed a contract for another year with the Spurs and probably his last season as there are rumors that this star wants to retire from his player life.

Manu Ginobili: Salary and Net Worth

Ginobili earns approximately $14 million a year. His estimated net worth is $45 million.

A rumor began in 2017 that Manu was retiring from the Spurs. Manu put to rest the rumors and speculations signing another year’s contract with Spurs in 2018.

This Basketball star from Argentina is six foot and six inches tall and weighs 93 kilos. The color of his hair is black. He has dark brown eyes. Other info on his body measurements is unknown.