(American journalist and the Senior Congressional Correspondent at CNN)

Updated On January 29, 2023 | Published By: Sonia Jimee
Share this
Married 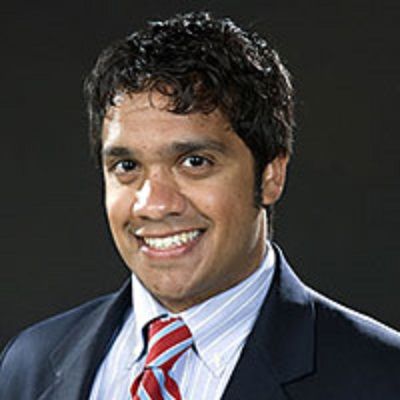 What is the relationship of Manu Raju?

Manu Raju is a married man. He is happily married to gorgeous Archana Mehta. His wife is an entrepreneur with a company AM strategies.

Their wedding date is unknown. The couple welcomed twins a son, and a daughter, in 2015.

Who is Manu Raju?

Manu Raju is a prominent American Journalist, a political analyst, and a Senior Congressional Correspondent at CNN, covering the United States Congress and Campaign Politics.

He has a very steady career. He has been going strong in his career with many honors and awards.

Raju was born into an Indian family in Downers Grove, Illinois on the 9th of February, 1980. His current age is 42. His parents are Dr. Tonse N. K. Raju(a neonatologist and a former professor at the University of Illinois) and Vidya Raju who immigrated from Kolkata, India in the 1970s.

Raju’s Grandfather is Gopalakrishna Adiga, who is a legendary South Indian poet. He has a sibling, Sharat Raju, who is a filmmaker.

Raju’s parents are originally from India however, Raju was born in the U.S.A. and thus holds the citizenship of America. His ethnicity is Indian.

In which school did Manu Raju attend?

Raju grew up in a very educated family; a family with a legendary poet. He finished his schooling at Hinsdale South High School in 1998.

He attended the University of Wisconsin-Madison where he graduated with a degree in Business Administration. During his time at the university, he worked in The Badgers Herald student newspaper as the sports editor.

Manu started his career by working at the assignment desk at NBC-15 in Madison, Wisconsin. Raju later joined Inside Washington Publishers in 2002.

He worked for Congressional Quarterly, The Hill Newspaper, and politico before coming to CNN in September 2015. Even before joining CNN, Raju was part of many other programs of different networks like NBC’s Meet the Press, and CBS’s Face the Nation.

In 2013, Raju broke major stories during the Government Shutdown and 2014. Once again in January of 2017, Raju broke the news with his detailed reports of the stock trade that subsequently raised ethical and legal questions to Tom Price and President Donald Trump’s Health and Human service nominee.

With a great career comes great honors. In 2012, he was honored with the Merriamme Smith Award for presidential reporting with a team of politico reporters for the covering of the debt ceiling crisis. He won the first prize from the Society of Professional Journalists in D.C. for beat coverage of the 2014 midterm elections, in 2015.

Similarly, in the same year, he also won the Folio Eddie Award for a feature profile he co-authored on Senator Elizabeth Warren.

In 2017, Raju was honored with the 2016 Joan Shorenstein Barone Award for excellence in Washington-based reporting of Congressional and political affairs for his coverage of Congress and campaign politics.

Raju has been able to build a successful career in the political journalism community. Reportedly, he earns about $100,000 per year. His net worth is approximately $3 million as per data of 2022.

His primary source of income is via reporting.

Is Manu Raju involved in any rumors and controversies?

CNN had to retract one of the exclusive reports of Raju. Which reported that the Trump Campaign, including Donald Trump Jr, had access to hacked documents from WikiLeaks however it was found to be incorrect.

However, CNN rejected it because Raju had particularly followed CNN’s editorial standards process.

Manu Raju has black colored eyes and dark hair. He has an average body length and body mass.

Raju is very active on social media such as Twitter. He tweets quite frequently. Moreover, he has a total following of almost 273K on Twitter likewise 2.8K on Instagram.