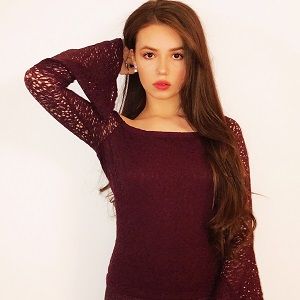 Mara Justine is currently possibly single. Currently, she is too young to be in a relationship. Furthermore, she has never been involved in any affairs to date.

Who is Mara Justine?

Mara Justine is an American pop singer. She rose to fame after being a finalist on the 9th season of NBC’s America’s Got Talent.

Later, she began to practice her vocal with famous vocal coach Sal Dupree.

Mara was born on February 28, 2002, in Galloway Township, New Jersey, United States of America. Moving towards his nationality, she is American and her ethnicity is unknown.

As a child, she developed her interest in music and also began to learn from a very early age. Talking about her education, there is not any information regarding her academics background.

Mara Justine began her career as a singer. From the beginning of her childhood, she had a keen interest and also began to train with famous vocal coach Sal Dupree.

When she was 11, she auditioned for the 9th season of ‘America’s Got Talent’ in the fifth episode. She rose to fame after being a finalist on that show.

During her audition, she sang Whitney Houston’s ‘I Have Nothing’. Furthermore, she sang Katy Perry‘s ‘Unconditionally’ and secured her spot in the semifinals.

Later, she reached into the final performing Kelly Clarkson’s ‘Breakaway’. However, she got out of the finals while she performed Perfect by Pink.

Being a famous singer, she earns a decent amount of money from her profession. However, her salary and net worth are unknown.

So far, she has not won any awards in her career to date.

As of now, there are no rumors regarding her personal and professional life. Furthermore, she has never faced any controversy in her career to date.

As she recently started her career, Mara has full focus on her work rather than stuck in any controversy.

Moving towards her body measurements, Mara Justine has a pair of gorgeous brown eyes and brown hair.