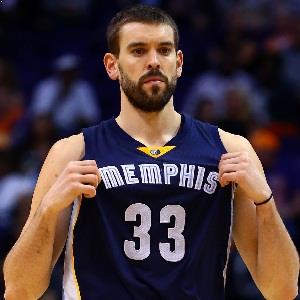 The Grizzlies's nothing new, we feel comfortable at the end. The ball bounced their way and they won the game. You have to stay positive and think about the next game.

Pondering an individual existence of Marc Gasol, he is married to Cristian Blesa. They got into a married relationship on 7 July 2013 after being in a romantic relationship for several months. They have been blessed with one child Julia who was born in November 2014. He doesn’t seem to have any extramarital affairs.

He is living a happy married life having no rumor on their separation. Being a superstar, his own stuff is dependably a matter of discourse and enthusiasm to people in general. Because of an absence of much data about him, his fans are constantly inquisitive to find out more about him.

Who is Marc Gasol?

Tall and handsome Marc Gasol is a Spanish well known professional basketball player. He is best known as the player for Memphis Grizzlies of National Basketball Association (NBA).  He plays from center position wearing jersey number 33.

Spanish professional basketball player Marc Gasol was born in Barcelona, Spain. He was born on 29 January 1985. He is of Spanish ethnicity and has a Spanish nationality.

His birth named is Marc Gasol Saez. His mother’s name is Marisa Sáez and father’s name is Agustí Gasol. He has one brother Pau Gasol who is also a professional basketball player and has won NBA Championship with the Los Angeles Lakers. His family has moved to Memphis suburb of Germantown, Tennessee.

Gasol studied at Lausanne Collegiate School in Memphis, Tennessee where he was nicknamed ‘The Big Burrito’.

After graduating high school he returned back to Spain and started his career journey by joining FC Barcelona of Liga ACB. Then he moved to Akasvayu Girona where he spends two seasons and named the 2008 ACB Most Valuable Player. He started playing in NBA after being selected by the Los Angeles Lakers in the 2008 NBA draft.

On 1 February 2008, he was traded to Memphis Grizzlies in exchange for his own brother Pau Gasol. On 9 July 2008, he signed a rookie scale contract with the Grizzlies and started scoring 10-plus points in straight 10 games. On 14 December 2011, he signed a four-year contract extension worth $58 million with the Gasol.

During the 2011-12 season, Marc Gasol recorded three double-doubles which earned him Western Conference Player of the Week honors. He was also named the NBA All-Star. He became the first European player to win the NBA Defensive Player of the Year during the 2012-13 season. He was forced to miss most of the games due to his knee injury.

On 29 October 2014, he set a career-high scoring 32 points in a winning match against Minnesota Timberwolves. ON 13 July 2015, he resigned with the Grizzlies. Gasol has neither signed nor traded to other teams. He has been playing for the team since 2008.

Marc has won various awards like in 2009, he won NBA All-Rookie Team. In 2013, he won NBA All-Defensive Team and NBA Defensive Player of the Year. In 2015, he won All-NBA Team and Prince of Asturias Award for Sports.

His success in career path has paid him well financially making his net worth estimated to be $40 million.

There’s an ongoing rumor on Marc Gasol that he is going to be traded to the Toronto Raptors.

Marc has a height of 7 feet 1 inch and weighs 116 kg. His hair color is light brown and eye color is green. His chest, biceps, and waist size is 48-17-42 inches. His shoe size is unknown.