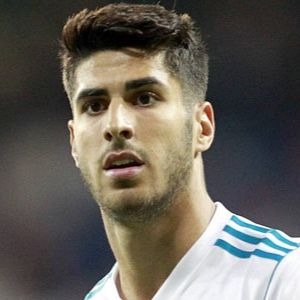 I am at the best club in the world and I am happy at Real Madrid, I work hard everyday to earn more minures but I am aware of where I am, My mom had always had a dream of seeing me play for Real Madrid. Iam very happy to be here but my mom isn't with me anymore whenever I score a goal I dedicate it to my mom,

Marco had been in a relationship with the stunning Mariana Muntaner in 2016. At present he is supposedly single.

However, recently he has rumor of having dating singer Dua Lipa. But Dua lips stated she haven’t met the football star Marco.

Who is Marco Asensio?

Marco Asensio is a footballer who plays for Real Madrid and the Spain national team. He is a  Spanish professional soccer player.

Marco is a regular player of the Real Madrid club for the UEFA Champions League and the UEFA Super Cup and he played the 2016-17 season for the club.

He is under contract with  Real Madrid until 2023.

He was born on born 21 January 1996, in Palma, Majorca, Balearic Islands. He is 25 years old. His birth name is Marco Asensio Willemsen. He was born to a Dutch mother and a Spanish father. His father, Gilberto, was also a footballer. His mother Maria Gertruida Margaretha Willemsem died of cancer when he was 15. He suffered from growth deficiencies in his knees during his youth, which only eased off when he was a teenager.

He has loved playing soccer, listening to music, visiting beautiful places, and playing video games since his childhood.

Although the information on his educational background is not clearly stated, it is believed that he passed through high school in Majorca.

Asensio made his senior debut with Mallorca’s reserves in the 2013–14 season in Tercera División. Despite still being a junior; in 2013 he made his first competitive appearance for the first team, playing the last six minutes.

At the onset of the budding soccer champion’s career, he played for the CF Platges de Calvià. The rising star scored his first professional goal against CD Tenerife in March 2014.

On the 5th of November 2015, Real Madrid signed a six-year deal with him.  The RCD Espanyol loaded Marco in La Liga after his whole pre-season with Real Madrid in 2015. Marco is a regular player of the Real Madrid club for the UEFA Champions League and the UEFA Super Cup and he played the 2016-17 season for the club.

His first goal against Barcelona FC was recorded during the 2017-2018 season and on the 28th day of September 2017, he extended his contract with Real Madrid to 2023.

In March 2015, Marco made his senior international match debut against Norway in Cartagena. He scored the two winning goals in the semi-finals victory over France during the UEFA European Championship which afforded him the opportunity to be selected for the 2017 European Under-21 Championship finals by the manager Albert Celades.

Marco Asensio: Salary and Net Worth

Recently this football star is in a rumor of having relation with pop star Dua Lipa. Superstar songwriter and singer Dua Lipa have denied the rumor.

The rumor filled the news after a Spanish publication alleged that the two had been spotted in a Kiev hotel together.

Marco has a very attractive appearance. This soccer star is 5.11 ft tall and weighs 76kgs. His eyes are brown in color and have black hair.