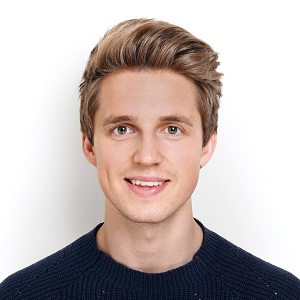 Marcus Butler is in a relationship. He is having an affair with Stefanie Giesinger. She is a German model. They met at the amfAR gala on the French Riviera in May 2016.

Prior he had dated Naomi Smart. She is a famous fashion vlogger. They were in a relationship since they were 16 years of age. They even own a flat together in London. But on December 22nd, 2015, the couple officially announced their break up on YouTube and Twitter after being in a relationship for seven years.

Who is Marcus Lloyd Butler?

Marcus Lloyd Butler is an English YoutubeVlogger. He is best known for his comedy YouTube channel, Marcus Butler. Prior, the name of the channel was Marcus Butler TV. He also has a second channel named MoreMarcus, where he has daily content from blogs, reaction videos to product testing videos.

Marcus was born on 18th December 1991 in Shoreham-by-Sea, United Kingdom. His nationality is British and ethnicity is English.

His parents’ name is unknown. He has two sisters named Heidi and Natasha. As a child, Marcus used to dress up in his sister’s ballet clothes. He was very fashionable since his childhood. His biggest fear is wasps and bees. And as we know, Marcus is very good at football because he loves football very much and not only in football, he’s also a keen basketball player.

There is no information on Marcus’ educational background.

Marcus Butler started his career on Youtube through his music video mixes and edited sports footages while in college. In 2010, Butler created his Youtube channel, Marcus Butler TV. He changed the name of his channel from Marcus Butler to Marcus Butler TV because of the public demand.

Butler and AlfieDeyes, who is an English YouTuber were featured on the 13th series of Ant and Dec’s Saturday Night Takeaway on ITV in 2016. In 2016, Butler was also the contestant of Celebrity MasterChef.

Since he started his YouTube channel in 2010, Marcus’ career has gone from good to better.

There has been no such rumors and controversy.


Marcus has a height of 6 feet and weighs 75 kg. His hair color is brown and eye color blue.His shoe size is unknown.