Marcus Mariot is an NFL quarterback in Tennessee Titans and wears the jersey #8. At such a young age, his salary and net worth is high. Marcus is dating a girl who is also into Football like him.

Marcus Mariota is in a relationship with a girl named ‎Kiyomi Cook. She is also into football now at the University School of Nashville.

Before Kiyomi Cook, Marcus was dating his high school sweetheart named Nicole Watase. However, they split in 2014. 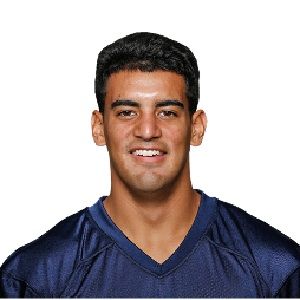 When things start to get rough, you find comfort in your faith. Knowing that no matter what, you can dust yourself off and be okay

I am a competitor, I want to go out there and lay it all on the line for my team

God has taught me that I can trust in Him. No matter what-whether things are good or bad-I know I can always trust in Him. And that has really allowed me to go All In for Him.

Who is Marcus Mariota?

Marcus Mariota is an American football player. He currently plays as a quarterback for the Tennessee Titans of the National Football League (NFL). He was drafted by the Titans second overall in the 2015 NFL Draft.

Mariota played college football at the University of Oregon where he was the starting quarterback from 2012 to 2014. As a junior in 2014, Mariota became the first Oregon player and Hawaii-born athlete to ever win the Heisman Trophy.

Marcus was born on October 30, 1993, in Honolulu, Hawaii, USA. Marcus is an American by nationality and he is of Samoan and German ethnicity.

He is the son of Alana Deppe-Mariota, mother, and Toa Mariota, father.

He has a younger brother named Matt Mariota.

He attended the Saint Louis School in Honolulu, where he was a two-sport star in football and track.

In 2012, he was named Team’s Most Outstanding Player and Manning Award Finalist. He is the winner of the 2013 CFPA Quarterback Trophy. He has also won several awards and honors.

Marcus Mariota began playing football professionally in 2015.  He was selected as the second overall pick in the first round by the Tennessee Titans in the 2015 NFL draft. In May 2015, he had the best-selling NFL jersey in the league.

Afterward, he agreed to a contract with the Titans on July 21, 2015. After that, he made his professional debut on August 14, 2015, in the first preseason game against the Atlanta Falcons. Mariota was named AFC Offensive Player of the Month for November 2016.

Marcus Mariota has an annual salary of ‎$600,000 and a net worth of 6 million dollars.

During his draft, there were a number of rumors making the rounds in 2015. He did not land in any major controversies in his personal or professional life.

Marcus Mariota is 6 feet 4 inches tall with a weight of 101 kg. He has black hair and dark brown eyes. There is no information about his shoe size and dress size.