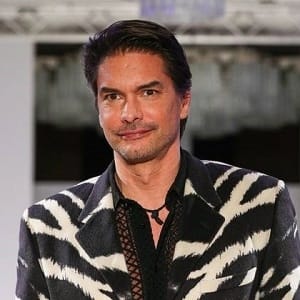 He has dated many models and supermodels over the years such as Victoria Silvstedt, Sandra Nilsson; actresses such as Kylie Bax, Patricia Velasquez; businesswomen Nicky Hilton and singers such as Jessica Simpson, Mariah Carey.

He is now considered to be single.

Who is Marcus Schenkenberg?

Marcus Schenkenberg is a Swedish supermodel. He is also an actor, singer, and author of a book. He was one of the highest-paid models of the 90s.

Schenkenberg was born in Stockholm, Sweden on August 04, 1968. He is 51 years old.  He was born to mother Marianne Yvonne (Wientjes) and father Robert Lodewijk Schenkenberg van Mierop, a prominent architect in Sweden. The details about his siblings are not available.

Marcus is of Swedish and Dutch nationality and he belongs to a mixed ethnic background of Indonesian and Dutch.

Schenkenberg’s academics details are not available.

As per reports, Marcus Schenkenberg was first spotted by photographer Barry King from California on Venice beach and helped him with test shoots and finding a modeling agency. After that, he has been on a very successful journey. Schenkenberg is prominently known for his modeling work in the Calvin Klein ad campaign in the 90s.

Along with that, he has modeled for big fashion houses such as Versace, Giorgio Armani, Donna Karan, and Iceberg. He is considered to be one of the first male supermodels and was the most sought after model in the 90s. He has also been in pages of major fashion magazines such as ‘Harper’s Bazaar’, ‘Vogue’, ‘Elle.’

Schenkenberg also tried his hand at acting starting with the 1988 movie ‘Meatballs and Maccaroni’. Along with that, he has also acted in movies such as ‘Prince Valiant’,’ Hostage ’, Multiple Sarcasms’, ’Smash’. He has also featured in American drama series ‘V.I.P’, British show ‘Never Mind the Buzzcocks’ and German television program ‘Germany’s Next Topmodel.’

He authored a book in 1997, titled ‘Marcus Schenkenberg, New Rules,’ where he talks about his modeling career and modeling business. It also features prominent photos of Schenkenberg over the years.

Schenkenberg hasn’t won any major awards yet but as far as recognition is concerned, he made the list of ‘50 Most Beautiful People in the World’ by ‘People’ magazine in 1992.

Schenkenberg’s net worth is considered to be around $15 million which comes as a no surprise as he has spent nearly 30 years in the modeling world.

Schenkenberg has lived his life without any controversies. Still, in late 2018, a rumor surfaced about his naked photos being leaked which were later debunked.

Additionally, his hair color is brown and his eye color is light brown.