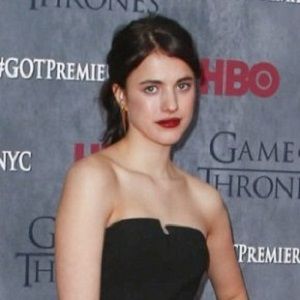 I like a bohemian floral dress, but then I'll throw on a leather jacket or a pair of lace-up boots to give it an edge. My mom is always trying to get me to wear really sweet clothes. Something pink. But that's not really my look

Ballet, there's a right way to do things, and it's black and white, and it's all striving for perfection. Acting is not that way. It's very gray, and the messier you can be, the better. The mistakes that you make are the gold and the beautiful stuff.

Margaret Qualley is a 22-year-old actress. From 2012 to 2014, she was in a relationship with the American actor Nat Wolff. After that breakup, she was single for a while.

Then in May 2017, she was linked up with Cary Fukunaga as confirmed by US Weekly. However, the both have not given any statements on their dating affair.

Who is Margaret Qualley?

Margaret Qualley is an American actress and model. She is best known for playing Jill Garvey on the HBO television series The Leftovers. She portrays the character Jill in the series since 2014. She also had roles in the films such as The Nice Guys, Novitiate, and Sidney Hall.

Margaret Qualley was born on 23 October 1994, in Montana, USA. She is an American by nationality and is of Norwegian, Scottish, Irish, and Welsh ethnicity.

Her birth name is Sarah Margaret Qualley. She is the daughter of Andie MacDowell and Paul Qualley. Her mother is a former actress and model, and her father is a former model, musician, contractor, and rancher. Her sister, Rainey is also an actress, dancer, and model.

Margaret made her modeling debut at the age of 16 during New York Fashion Week, walking for Alberta Ferretti in 2011. She is currently signed with IMG Models and Uno Models Barcelona. Qualley first appeared on screen in 2013 playing a small part in Gia Coppola’s film Palo Alto. In June 2013, she has cast as a series regular in the HBO television series The Leftovers. Since then, she portrays the character Jill Garvey in the series. In 2016, she appeared in Shane Black’s comedy The Nice Guys. In April 2016, Qualley was announced to have joined the cast of Shawn Christensen’s Sidney Hall. She also appeared as the central character in a Spike Jonze-directed commercial for KENZO World. In 2017, she will be seen playing Mia Sutton in Death Note.

Margaret Qualley: Salary and Net Worth

Margaret Qualley has a height of 5 feet 8 inches. Her body weighs 56kg. Besides these, she has light brown hair and blue eyes. Her body figure measures the size of 33-24-34. Furthermore, her shoe size is 9 US, dres’ size is 2 US and bra size is 32A.