Updated On January 26, 2023 | Published By: Natalie | In Career , Interesting Facts
Share this 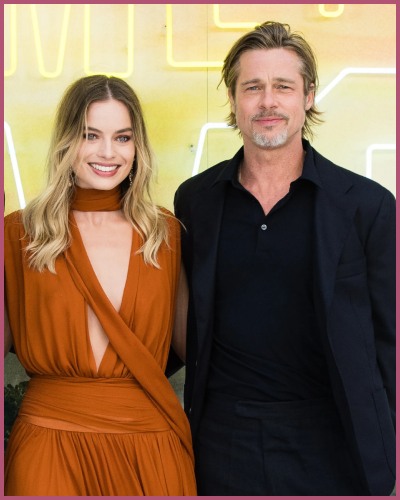 Margot Robbie said she was excited to kiss Brad Pitt in their latest movie. source: People

Margot Robbie knows that it is not every day you get to kiss Brad Pitt.

The actress recently opened up about how she persuaded her Babylon director Damien Chazelle to let her kiss Brad in the upcoming movie which was initially not in the movie script.

The Academy Award nominee also revealed that she improvised the kiss with some help from the direction.

“I thought, ‘When else am I gonna get the chance to kiss Brad Pitt? I’m just gonna go for it,’

The actress further noted that the scene was great and added how her conversation with Chazelle, 37, about the scene, went. She went:

“I said, ‘Damien, I think Nellie would just go up and kiss Jack. And Damien was like, ‘Well, she could — wait, hold on. You just wanna kiss Brad Pitt.”

After one take, the Academy Award-winning director thought the scene was good for the movie. Robbie said:

The 32-year-old  actress also talked about her costar Katherine who plays Ruth Arzner in the movie. She continued:

“I actually kissed Katherine [Waterston], as well, but I don’t know if that made the cut,”

The movie is set in 1920s Hollywood which shows the period when the movie industry was transitioning from silent films to talkies. Margot plays the role of a budding actress Nellie LaRoy and Brad, 58, plays Jack Conrad.

In an interview with a magazine last month, the Australian actress revealed the extreme amount of work needed while filming the movie.

”I’ve never worked that hard in my life. I was shattered  by the end of that job.”

Fans are excited about the movie which premieres on December 23.

This is not the first time, Robbie and Pitt are sharing a screen. The duo previously worked on films like Quentin Tarantino‘s  Once Upon a Time… in Hollywood and Adam McKay‘s The Big Short.

Margot and Brad also revealed that the movie is so long that it will make everybody’s chin will need a tweezer.

Margot who was shocked to see the script for the first time said:

”I read the script and my jaw hit the floor. It’s like if ‘La Dolce Vita’ and ‘Wolf of Wall Street’ had a baby.”

Pitt also recalled seeing the script for the first time and expressed his shock. The Hollywood legend said: