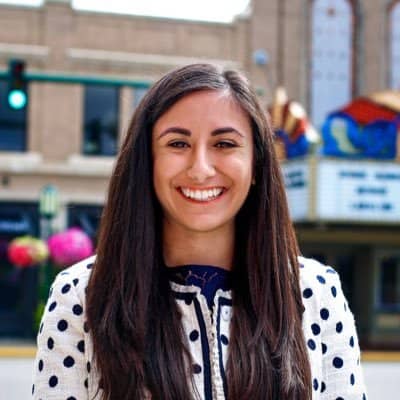 There is so much more we can do so that all families have a fair shot.

Together, we can build a better and brighter Michigan for all of us.

Mari Manoogian is currently possibly single. She has not disclosed her relationship and affair.

Previously, she was in a relationship with the singer Drew Parks.

Who is Mari Manoogian?

Mari Manoogian is an American politician. She is popular as Michigan House of Representatives from the 40th district.

This politician was born on 3 September 1992, in Michigan, the United States. Her father‘s name is George, who is a utility worker and union leader. Her mother‘s name is Sandy, who is a vocational rehabilitation specialist. She has a younger sister named Alis.

She attended Ernest W. Seaholm High School and completed her undergraduate from James Madison College. Mari graduated with a bachelor’s degree in international relations and security policy from Elliott School of International Affairs.

Afterward, she completed her master’s degree in global communication and international organization from the same university (George Washington University).

She holds an ethnicity of Armenian-American.

Earlier after undergraduate, Mari Manoogian interned in the office of John Dingell and US Missions to the UN. She started working in the Office of English Language Programs and later joined the Office of eDiplomacy at the United States Department of State, in Washington D.C.

Afterward, in 2017 August, she started campaigning for selection to the Michigan House of Representatives. Manoogian received an endorsement from a political organization Run for Something.

The next year, she defeated Nicole Bedi, who was the 2016 Democratic nominee for the 40th District and won the Democratic primary. At the time of the general election, former President Barack Obama and former U.S. Presidential Candidate Hilary Clinton endorsed her.

She defeated former vice chairman of the Michigan Republican Party David Wolkinson by 56.5% to 43.4%. This time, Mari won flipping the district for the first time in 22 years.

Later, she became one of seventeen speakers to jointly deliver Keynote address at the 2020 Democratic National Convention. Manoogian is also a member of St. Sarkis Armenian Apostolic Church.

She supports investment in renewable energy sources and repeals the state Senior Pension Tax. Several local and national news outlets profiled her in the lead-up to her election for supporting funding for clean water initiatives in her district.

The salary of the Michigan house of a representative is $72,000 plus expenses. Meanwhile, the net worth of this politician is still under review.

There is no rumor and scandal about Mari. Meanwhile, she has managed to keep herself out of any rumor and controversy. She is doing well in her career.

Mari Manoogian has a decent height and weight. Likely, she has dark brown hair and brown eyes.