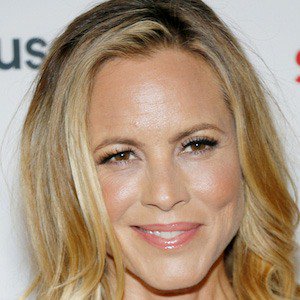 My biggest dream since I was a kid was to be the woman sneaking on the pirate ship dressed like a man, who was this great sword fighter, and the captain fell in love with her.

When you fall head over heels for someone, you're not falling in love with who they are as a person

you're falling in love with your idea of love.

I want to do more action adventures and more romantic comedies.

Currently, she has been dating Elijah Allan-Blitz since 2016. They have not revealed any future plans, but they are enjoying their love life. Hope, they will get married soon. She currently lives in Venice, California with her son and her boyfriend, lives a few blocks away.

Who is Maria Bello?

Maria Bello is an American actress and writer. She is popular for her roles in ‘ER’, ‘The Cooler’, ‘A History of Evidence’, and ‘Prisoners’. She is also better known for her performances in ‘Touch’, ‘NCIS’, ‘Payback’, and many more.

She was born on April 18, 1967, in Norristown, Pennsylvania, USA. Her birth name is Maria Elena Bello and she is currently 51 years old. Her father’s name is Joe Bello (a contractor) and her mother’s name is Kathy (a nurse and a teacher).

Bello’s father belongs to Italian American and her mother is Polish American. Her mother is a cancer survivor and she was with her daughter, Maris, during the attacks of the World Trade Center and Kathy volunteered to help the victims. She has got two brothers: Joseph and Christopher and one sister: Lisa. She grew up in a Roman Catholic family.

At the age of 20, she was diagnosed with bipolar disorder. Maria holds American citizenship but ethnicity is a mix of Polish and Italian.

Talking about her education history, she graduated from Archbishop John Carroll High School in Radnor, Pennsylvania and later she went to Villanova University and majored in political science. She was interested to become a lawyer but she took acting classes during her senior year, just for fun.

She debuted her television career from a minor role in Fox’s TV series, ‘Misery Loves Company’ in 1995. She appeared as the female lead role of a corporate spy in the CNS television drama ‘Mr. & Mrs. Smith’ by the following year and later moved to the film industry.

Maria Bello has debuted her film career from the role of Kitty in the film ‘Permanent Midnight’ in 1998. After a year, she portrayed the role of Rosie in the film ‘Payback’. Also, she appeared as Gail Monahan in ‘Towelhead’ in 2007, Nancy Stockwell in ‘Downloading Nancy’ in 2008, Kate Carroll in ‘Beautiful Boy’, Martha in ‘Bravetown’ in 2015, Lindsey in ‘Evry Day’ in 2018, and as Carly Winter in ‘Giant Little Ones’ in 2018.

She has an estimated net worth of around $8 million and she has earned that sum of money from her professional career. Also, she earns around $125,000 per episode from the American reboot of the British series, ‘Prime Suspect’.

There was a rumor regarding her separation of her with her girlfriend, Clare Munn, and the rumor has ended after she began dating Elijah Allan-Blitz.