Maria is a Grammy-nominated artist. She is quite lowkey about her personal life. 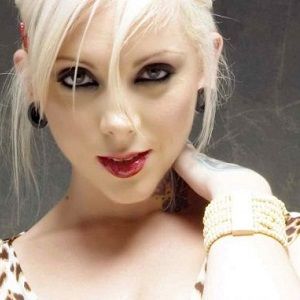 Well, I don't have a father, so there's no daddy being protective of the daughter

My mom is a total free-spirited hippie flower child. Always has been. My mom always supports me in whatever it is that I do, and she loves me

I think, for me, the biggest challenge is being a mother with my more provocative side. But to me, I'm an artist, and I and my son have a really beautiful relationship

Maria is single and unmarried and also a mother of a son. She was engaged in a relationship with her boyfriend Jonathan Miller and split up in 2010. And, there is no information on her current relationship status.

Who is Maria Brink?

Maria Brink is an American singer, songwriter, painter, lead vocalist, and pianist of a heavy metal band. She is also known as the frontwoman of the American heavy metal band named In This Moment.

Maria Brink was born on December 17, 1977, and she grew up in a damaged home in New York City. She and her mother were abused by her father and later her father left her mother and her alone.

She told in an interview that her mother is a ‘total free-spirited hippie flower child. She then wrote a song explaining her this current situation named Daddy’s Falling Angel.

Her mother was addicted to drugs and she had a tough childhood. Her grandfather was the head of the family who supported and encouraged her in her every step. And she had a loving grandmother.

When she was 15 years old, she became a mother and started to live alone with her son. She helped her mother to overcome her drug habit.

Maria became pregnant when she was in the ninth standard. In her high school days, everybody thought she won’t be able to graduate as she was already the mother of a son at the age of 15.

After she became a mother, she moved out on her and got her own apartment. She then worked at a local laundromat so that she can pay for her rent.

She worked with local band projects until 2002. When she was 18 years old, she joined an Albany-based band called Pulse which opened local shows for bands such as the coal chamber and Sevendust and soon broke up too.

After her first band broke up, she made a big decision and drove to Los Angeles. She worked in stores, sang in coffee shops and bars for two years in order to tackle her dark times.

Maria met Chris for the first time in an audition. He did not give her a chance for the audition because she was a woman until he heard her singing and later apologized.

After her audition, Maria, Chris, and Jeff together formed a band named Dying Star. The song called Drifting considered as In This Demo was actually recorded under the name of the band Dying Star.

Later, she wrote a song named legacy of Odio as a tribute to her best friend’s death.

Maria was awarded by Rock Goddess of the Year in the 3rd and 5th Annual Loudwire Music Awards in the years 2013 and 2015. She was also known as the Hottest Chick in Metal in 2010.

She was also featured in the magazine of 2012 as one of the eleven women in heavy metal who matter by their yell. She was recognized by Revolver Magazine as one of the 25 Hottest Chick in Hard rock and Metal.

Her net worth is estimated to be more than $2 million.

She had a childhood full of struggle. She was left with her drug addict mother by her father when she was young. She became a mother when she was only 15 years old. She had lots of struggles a lot and finally, she was successful to start her career when she moved on to Los Angeles.

You may also like to read the bio, age, family, salary, love affairs, education, social media of, Ruel, Tiffany Houghton and, Chris Loesch.