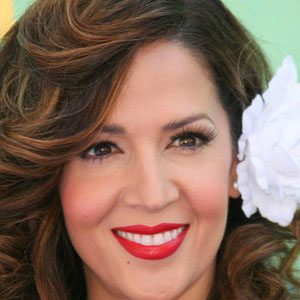 Heels I've always loved, but a wedge is perfect, in between glamorous and a common shoe. If going to the store, why wear flip-flops when you can wear wedges?

I used to watch my Cuban mother getting ready singing 'Dos Gardenias,' so to me fashion has always been fun.

I can't remember a time when I didn't want to be in show business!

What is the relationship of Maria Canals-Barrera?

Maria Canals-Barrera is a married woman. She has been married to her long term boyfriend David Barrera on January 16, 1999. Davis is also an actor who is famous for his role as Gunnery Sgt. Ray ‘Casey Kasem’ Griego in ‘Generation Kill’. The couple began dating from 1997 and tied their knot after two years of relationship.

The family is currently residing in Los Angeles and they are sharing quality time with each other.

Maria Canals-Barrera is an Amerian actress who is famous for her appearance in the highly rated Disney Channel family sitcom, ‘Wizards of Waverly Place’. She is also widely recognized for her appearances in ‘Camp Rock 2: The Final Jam’ in 2010, ‘Larry Crowne’, and ABC comedy series ‘Cristela’.

She was born on September 28, 1966, in Miami, Florida, USA. Her birth name is Maria Pilar Canals and she is currently 55 years old. Her parents belong to Catalan descent. She has not disclosed information about her parents and about her siblings.

She is fluent in Spanish and English. Maria holds American citizenship and her ethnicity is Cuban.

Talking about her education history, she took drama lessons in junior high and later graduated from the University of Miami.

She began her career in theatre in both Los Angeles and Miami. Then, she began acting professionally after she appeared in Telemundo Spanish-language telenovela ‘Marielena’ in 1992. After that, she made her big screen debut from ‘Cop and a Half’ by the following year, which became highly successful in the box office and her character was also highly praised.

Recently, she portrayed the role of Saffron in ‘Knight Squad’, Marisol in ‘Young & Hungry’ and as Nadia in ‘Fuller House’ in 2018. Also, she gave the voice of Titan’s Compute in the film ‘Teen Titans: The Judas Contract’ in 2017.

As per 2022’s data, she has an estimated net worth of around $2 million and she has earned that sum of money from her professional career. But, her salary and income are under review.

The actress has been successful in maintaining her celebrity status and she has not harmed any other person in her carer. So, she has not been involved in any types of rumors and controversies in her career.