Maria Sansone Emmy Award-Winning Host and television personality from America. Maria is married to her husband since 2008. Together they have two children.

Maria Sansone is a married woman. She married her husband, Joshua Guthartz in 2008.

The wedding ceremony took place at Saint Andrew Roman Catholic Church. Furthermore, she announced that she was having a baby due around Christmas time live on Good Day LA on July 15, 2013.

They have two children named Grace and Benjamin. Grace, their daughter was born on December 31, 2013.

They have a dog, Ralphie. 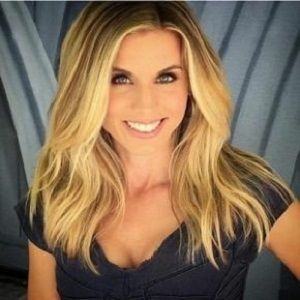 Now get back to work!

Animal print is my neutral.

Who is Maria Sansone?

Maria Sansone is an American television personality. She was the co-anchor for ‘Good Day LA’ on KTTV FOX 11 in Los Angeles.

In addition, she is a former field reporter for WNBC 4 New York.

Maria was born in Erie, Pennsylvania, in the United States on February 26, 1981, Maria Grace Sansone. There is not much information relating to her parental background.

Additionally, she became involved in the world of show business during her childhood years and throughout her early life. She is of American nationality and has Italian ethnic background.

Talking about her education, Maria attended Villa Maria Academy in Erie, Pennsylvania. She played varsity basketball while she was there.

Additionally, she attended Syracuse University’s Newhouse School and graduated with a degree in Communications and Political Science in 2003.

Initially, Maria Sansone became the youngest reporter in the history of network television. At just eleven years of age, she hosted her own children’s sports show, ‘Down to Size’, on WJET-TV ABC in Erie.

Furthermore, she went on to interview Jim Kelly of the Buffalo Bills, Bill Cowher, coach of the Pittsburgh Steelers; baseball legend Tommy Lasorda; and others, all before her 13th birthday.

In December of 1992, she appeared on ‘The Tonight Show with Jay Leno’. Later, she went on to national broadcasts of ABC’s Little League World Series, Professional Bowling Tour, and Wide World of Sports for Kids, and also reported from the U.S. Figure Skating Championships.

In addition, ABC Sports picked her to do live sideline reporting for their coverage of the Little League World Series.

Maria filled in as co-host on ‘Live with Regis and Kelly’ with Regis Philbin. After her graduation, she moved to Manhattan and became a VJ for MTV Networks and hosted web sensation, ‘The 9’ on Yahoo as well as Pop Tub on YouTube.

Furthermore, she has contributed to Access Hollywood, Extra, ABC’s On the Red Carpet, NBC, TV Guide Network, CBS Sports, NESN, and ESPN during her career.

Maria currently has a salary of about $400 thousand. Furthermore, she has an estimated net worth of around $2 million.

Maria became part of a controversy after the Fox-owned Los Angeles station announced it hired Maria instead of Jillian Barberie Reynolds.

Some people took to Twitter to express their dissatisfied views regarding the matter. Additionally, there are no rumors concerning her at present.

Talking about her body measurement, Maria Sansone has a height of 5 feet 1 inch(1.54 m) and her weight is unknown.

Additionally, she has a body measurement of 34-28-34 inches. Furthermore, her hair color is blonde and her eye color is blue.

Maria is quite active on social media and has a website of her own.