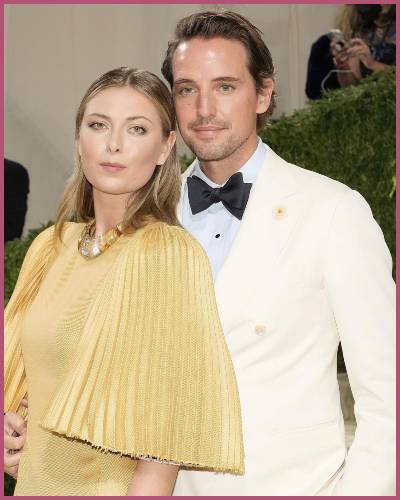 Maria Sharapova, 35, and her fiance Alexander Gilkes, 42 are expanding their family member.

The retired tennis star Maria Sharapova announced the happy news on Tuesday in honor of her 35th birthday. She took to Instagram to share that she is expecting her first child with her fiance Alexander Gilkes.

The 35-years old player posted a photo on the beach cradling her baby bump with a thrilling caption. She captioned the post,

“Precious beginnings!!! Eating birthday cake for two has always been my specialty”

Well, congratulations to the couple on their upcoming new journey in the role of parents.

Also read “Maria Sharapova has confirmed her engagement to her boyfriend, Alexander Gilkes! Fans are delighted!”

The two got engaged back in December 2020. The sportswoman made the confirming announcement via social media platforms, posting a black and white selfie with the businessman. She wrote alongside the post,

“I said yes from the first day we met. This was our little secret, wasn’t it,”

Similarly, the pair started dating back in 2018.

Who is Maria’s fiance Alexander Gilkes?

Alexander is a British businessman who is most famous for his marriage to fashion designer Misha Nonoo. Misha is the woman who got Prince Harry and Meghan Markle together.

Besides, he is popular as the co-founder of Squared Circles, launched in 2020. Prior to that, he co-founded Paddle8, an online auction house for art and collectibles where he served as the president from 2011 to 2018, until stepping down when it was sold to The Native.

Similarly, earlier he worked as an auctioneer at ‘Phillips de Pury & Company’, Elton John AIDS Foundation’, ‘amFAR’, ‘Raising Malawi’, and more. In 2017, he was named one of the Fast Company’s Most Creative Entrepreneurs. He has been named the 100 Most Powerful People in the Art World (Art + Auction) in 2014, 2015, and 2016.

Maria Sharapova is a well-known Russian tennis player. She earned a lot of fame and popularity for winning in prestigious events such as the US Open, Italian Open, Australian Open, and Wimbledon.