Maria Stephanos is an American Journalist currently Anchoring at #WCVB in Boston. Maria is married to her husband Dale and has two children. 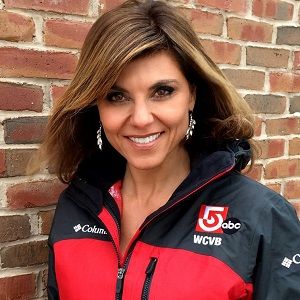 The 57-year-old popular American journalist, Maria is a married woman. She tied the knot with Dale Stephanos. Since their marriage, they have maintained a sound relation between them and have never been involved in any disputes.

Furthermore, they also have two children Liam Stephanos and Isabella Stephanos. Moreover, she has never been involved in any extramarital affairs and has never been spotted with any other man in public.

As of now, they are continuing their beautiful married life and living beautifully along with their children.

Who is Maria Stephanos?

Maria Stephanos is an American journalist who currently works on WCVB Channel 5.

She also served as a co-anchor of NewsCenter 5, Chief Meteorologist Harvey Leonard, and Sports Anchor Mike Lynch. Previously, she was a news anchor and reporter at Boston’s WFXT-TV.

Currently, she serves as a news anchor at WCVB TV’s Boston station.

Maria Stephanos was born in 1964, in Groveland, Massachusetts, United States. Her current age is 57. Talking about her nationality, she is American and her ethnicity is White-American.

She grew up in Groveland along with her parents. There is not any information regarding her family background and childhood.

Maria Stephanos began her career as a journalist working in several radio stations. Prior to television, she used to work in a couple of radio stations including WBUR, WCBS Radio, NPR Radio, and WNBC RADIO.

She came into WCVB Channel 5 from Boston’s WFXT-TV where she used to be a news anchor and reporter for nearly eighteen years. After that, she started working as a reporter for several NPR radio stations and WCBS Radio, and WABC Radio in New York.

Currently, she is a famous reporter who currently works at WCVB Channel 5. Furthermore, she serves as a co-anchor of NewsCenter 5, Chief Meteorologist Harvey Leonard, and Sports Anchor Mike Lynch. Previously, she was a news anchor and reporter at Boston’s WFXT-TV.

During her long journalism career, she has covered many big stories such as the plane crash of John F. Kennedy Jr., the Worcester Cold Storage fire, the Presidential recount vote live from Florida, the 9/11 attacks, and much more.

Additionally, Maria Stephanos has also reported a couple of more big sports news including the Red Sox World Series win, the Patriots’ Super Bowl wins, the deaths of Senator Edward Kennedy and Boston Mayor Thomas Menino, and a few others.

Moving towards her body measurements, she has a pair of beautiful brown eyes and dirty blonde hair. She has a height of 5 feet 2 inches tall and her weight is 50 kg.