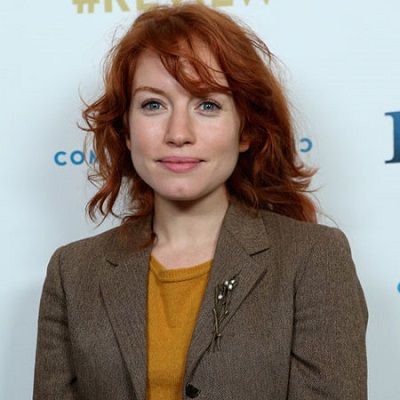 Documentaries are my favorite thing, and the more depressing, the better.

What is the relationship of Maria Thayer?

Even though Maria was born on a bee farm she is allergic to bees.

Who is Maria Thayer?

Maria Thayer is an American actress known for portraying the role of Tammi Littlenut in Strangers with Candy.

Maria Thayer is well-known for playing the role of Abbey Logan on Those Who Can’t.

She also appeared in I’ve Got Issues.

Maria Christina Thayer was born on 30th October 1975 in Portland, Oregan, US. She is the daughter of Catherine Thayer (mother) but her father’s name is unknown. She has a brother John Thayer.

She was raised in the small town of Boring, east of Portland. Her parents owned a bee farm. After some time, her family migrated to Minnesota.

Maria was educated in the Apple Valley High School in Apple Valley, Minnesota. She was a member of the award-winning forensics program and the National Forensic League. In high school, she became the Homecoming Queen.

After that, Maria attended The Julliard School in New York and studied acting.

Maria started her TV career by playing the role of Tammi Littlenut in Strangers with Candy.

After that, she appeared in many series from 2001 to 10 which include Big Apple, The education of Max Bickford, Miss Match, Law & Order: Criminal Intent, Comedy Lab, Romancing the Bride, Will & Grace, Lipstick Jungle, House, and others.

In the year 1999, Maria played the role of Louise in Kimberly. After that, she appeared in Storytelling, Scratch, Strangers with Candy, Hitch, Accepted, the State of Play, and Let Go.

Recently, she was on Night of the Living Deb and Table 19.

In 2002, she portrayed the role of Nuna in Necessary Targets, Sara Maynard in Endpapers, Stranger in the Park in Unscreened, and Rosaline in Love’s Labour’s Lost.

How much is the net worth of Maria Thayer?

She was part of the movie Table 19 which grossed $5 million US. Her fiance David Harbour has an estimated net worth of $4 million US.

Maria Thayer is a blue-eyed-brunette. She is almost 5 feet 5 inches tall and has a decent weight.