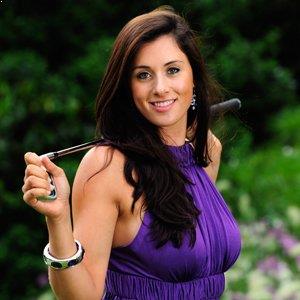 There are no records of Maria Verchenova’s past relationship affairs. She was married to businessman Valery Balikoev in 2012. They met at the Moscow City Golf Club. In May 2011, she was his coach which was a root cause of the blossoming relationship between the couple.

On September 18, 2012, she gave birth to a daughter named Maria. The marriage seems to be going strong as no news regarding any extramarital affairs has emerged as of now.

Maria Verchenova is a Russian professional golfer who became the first Russian to become a full-time member of the Ladies European Tour.

Maria was born in Moscow, Russia on March 27, 1986, to Galina Verchenova (her mother) and Vitaly Verchenov (her father). Other information regarding the early life of her is missing at the moment.

She attended the Moscow Ballet School in 1992 and began playing golf. She graduated from the Russian State University of Physical Culture, Sports, and Tourism. She started playing at the age of just 12 while accompanying her father on a trip to the Czech Republic, a coach at the club suggested her to take up the spot on her return to Moscow after showing some skill as a golfer during that time.

Maria initially didn’t get proper chance to showcase her talent as Russia had no support for young golfers. But due to her immense interest to the game and determination, she started practicing her puts and swings at Moscow Golf Club. She won the 2004 Russian Amateur Championship at the age of 18 despite lacking any proper backing. This was the first success she had in what she loved to do the most.

After that, she then moved to the Moscow State University of Sport in 2005, where she won some more non-professional titles at the Austrian, Latvian and Slovenian Amateur Championships. She was successful to garner her second victory in the Russian Amateur Championship in 2006. After the victory, she tried to secure a Ladies European Tour Card for the second time but failed to advance through the final stage.

Maria earned under $18,000 during her first year on the lady’s pro circuit. Although she struggled at first at the Wales Championship, she rejoined in 2008 under a new coach, Mike Walters and finished fifth at the Tenerife Open held in June.

Her first qualification in a major competition was at the Women’s British Open and she rounded her breakthrough year by competing at the Dubai Ladies Masters in December.  She was able to finish 35th at the Honda LPGA in March 2009 in Thailand and tied for 41st place at the Deustche Bank Ladies Swiss Open held in May.

Information regarding Maria’s salary and net worth is not available currently.

Maria has not been part of any controversies in her career and has been successful in maintaining a good public image of herself.

Maria has a height of 5 feet 9 inches (1.75 m) and weighs 64 kg. Additional information regarding her body measurement is not available at the moment. She has the dark brown hair color and brown eye color.

Holly Sonders is not just good at playing Golf..but also her looks are Attention-Grabbing through her career and lifestyle