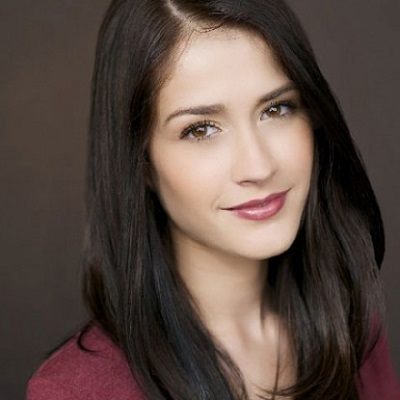 They started dating each other in January 2017 and started living together in May 2017. Eventually, The couple got engaged to each other on 30th May 2018. Later, the wedding took place married on 11th November 2018 in Keystone, CO.

Prior to that, she dated the actor, Nick Roux. They started dating each other in 2012 and broke up after four years of relationship. Before that, he has in a relationship with Carter Jenkins.

Brazilian Mariah Buzolin is a former actress. Buzolin is renowned as Maya Mercado of All My Children and Zoe Mendez of Jane by Design.

Last, in 2016, she made her appearance in the TV series, Girl Meet World as Ault Riley.

Mariah Buzolin was born on 3rd February 1991 in Campinas, São Paulo, Brazil. Her full name is Mariah Buzolin Oliveira. She is of Portuguese ethnicity with Latin roots.

She happens to the youngest child to her parents. To date, she has not shared any details on her family background including her father, mother, and siblings. However, she has an elder sibling.

At the age of 6, she moved to Chicago along with her family. However, the biggest hurdle for her became the English language which she overcame within three months. Her journey in the entertainment sector started at the age of 12 with the various fashion contests and other competition national wide.

In 2006, she relocated to Los Angels. Due to her talent, she drew the attention of several agents and agencies. Details on ger academics are not available.

She started her career as an actress with the short movie, Fallout as Sara. The same year, she made her appearance in the short, The Faithful as Brooke Margolin.

Following that, she made her TV debut with the series, Zoey 101 as Brooke Margolin. However, her role in the series was only limited to an episode. After that, she featured the series like Jonas, Lie to Me, and Glory Daze.

In 2009, The movie, Hotel for Dogs launched her as the movie actress. However, she mostly appeared on TV after the movie. In 2011, she featured in the opera soap, All My Children as Maya Mercado. The character, Maya of the soap became one of the successful characters that she portrayed on the screen.

The following year, she featured the comedy-drama, Jane by Design as Zoe Mendez. Following that, she appeared in TV series like Hit the Floor, Jane the Virgin, and Girl Meets World. The series, Girl Meets World (2016) the last movie till now on her acting career.

Talking about net worth, her husband, Jeremy has an estimated net worth of $5 million. His net worth is attributed to his career as a model and skier.

She has brown eyes with black hair. She stands at a height of 5 feet and 5 inches and has a decent weight.

As of now, she has not been involved in any type of controversy and scandals that created a buzz in the media. Besides that, she has managed to maintain distance from any kind of rumors.