Marian Seldes was initially married to Julian Claman. The pair was together from 3 November 1953 to 1961. They had a daughter together: Katharine Claman.

Seldes’ second marriage was to Garson Kanin. They married on 19 June 1990 and were together until Garson’s death on 13 March 1999. 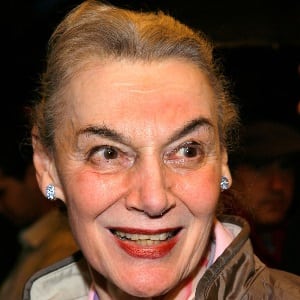 [on her 2010 Special Tony Award for Lifetime Achievement in the theater]: Yes, utterly. All I've done is live my life in the theater and loved it. If you can get an award for being happy, that's what I've got.

[on her shoulder in 2010]: I wasn't used to pain. Except for having my daughter I've never been in a hospital. I've always had very good stamina and counted on never losing it. But I think I'm going to regain it. This award makes me feel optimistic about it.

[on her greatest achievement besides acting]: Maybe the teaching. I hope so. Because that's helping somebody. It was the hardest thing too, because it takes an energy. If you look away from a student's eyes at the wrong moment, you can hurt them.

[on her appearance] I've never been obsessed by how I looked. In fact, I would rather have looked more ordinary so I could play more parts truthfully. You know what I'm saying?

Who was Marian Seldes?

Marian Seldes was an American actress. People mostly know her for her roles in movies including ‘Deathtrap’, ‘Ring Round the Moon’, and ‘Dinner at Eight’ among others.

Additionally, in 1967, Marian SelMarian Seldes was an American actressdes won the Tony Award for Best Featured Actress in a Play for ‘A Delicate Balance.’

This actress at the age of 86, passed away on October 6, 2014, in her Central Park South apartment. However, the reason for her demise is yet not revealed.

Seldes was born in Manhattan, New York City, New York as Marian Hall Seldes on August 23, 1928. She was born to parents Gilbert Seldes and Alice Wadhams Hall. Her mother was a socialite. Additionally, she had one brother, Timothy.

She became interested in the world of acting since her childhood years. She was of American nationality. Furthermore, she belonged to the mixed ethnic background of Ashkenazi Jewish and English.

Talking about her education, Seldes attended the Neighborhood Playhouse. In addition, she also attended Dalton School in New York City.

Marian Seldes initially made her Broadway theatre debut in 1948. Additionally, she had her first television role as Lady Macduff in the TV series ‘Sure As Fate.’ In the same year, she also appeared in another TV series ‘Hands of Mystery.’ She also played the role of Emily Bronte in the TV movie ‘Our Sister Emily.’

Since then, she appeared in numerous other movies and television series. All in all, she had over 100 credits as an actress.

Some other movies and television series that Seldes had appeared in are ‘Jeremy Fink and the Meaning of Life’, ‘Nurse Jackie’, ‘The Extra Man’, ‘The Metropolitan Opera HD Live’, ‘Leatherheads’, ‘August Rush’, ‘The Visitor’, ‘Suburban Girl’, ‘Law & Order: Special Victims Unit’, ‘Big Day’, ‘In from the Night’, ‘The Book of Daniel’, ‘Clubhouse’, ‘Plainsong’, ‘Frasier’, ‘Mona Lisa Smile’, ‘America’s Most Terrible Things’, ‘Half Hour to Kill’, etc.

Her other screen projects are ‘Hollywood Ending’, ‘The Education of Max Bickford’, ‘A Nero Wolfe Mystery’, ‘100 Centre Street’, ‘The Others’, ‘The Haunting’, ‘Celebrity’, ‘Sex and the City’, ‘Digging to China’, ‘Truman’, ‘In the Best of Families: Marriage, Pride & Madness’, ‘The General Motors Playwrights Theater’, ‘The Gun in Betty Lou’s Handbag’, ‘Murder, She Wrote’, ‘Good & Evil’, ‘In a Pig’s Eye’, ‘Gertrude Stein and a Companion!’, and ‘Kate McShane’ among others.

Seldes garnered the OFTA Television Award nomination in 1999 for her performance in ‘Sex and the City’ in the category of Best Guest Actress in a Cable Series.

Seldes had not revealed her salary. Furthermore, there are no details available about what her net worth was when she was alive.

Seldes became part of a controversy after her documentary came under fire due to its content. Throughout her career, Marian was not part of any notable controversies.

Talking about her body measurement, Marian Seldes had a height of 5 feet 9 inches and average weight. Additionally, her hair color was blonde and her eye color was dark brown.