Mariana Tosca is an American actress, social activist. Mariana is not dating anyone currently. 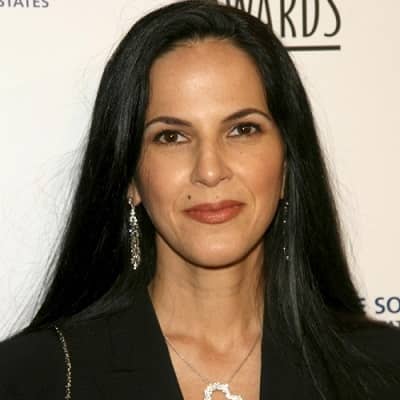 What is the relationship of Mariana Tosca?

Mariana Tosca is currently single. Even if she is dating or has a love interest, she is low key about her romantic life.

Who is Mariana Tosca?

Mariana Tosca is an American actress, social activist, and producer. Currently, she serves as a member of the Board of TheTenDollarClub.org.

Mariana Tosca was born in Salem, Massachusetts, the USA on December 28, 1971. As of 2022, her age is 50. Her biological parents remain unknown. However, she was adopted by Saginaw Grant.

Her adoptive father, Saginaw is a Native American character actor, motivational speaker, dancer, and the Hereditary Chief of the Sac and Fox Nation. She has not revealed much about her family and childhood.

During an interview, she revealed an incident she remembers. When she was just six years old while driving in a car with her parents, she saw a cattle truck that drove up alongside them.

“I locked eyes with these really beautiful soulful eyes and we just stared at each other as we were driving in tandem next to each other in the lanes.”

She later found out that they would eventually be someone’s dinner. Since then, she refused to eat meat and has been a vegan all her life.

Tosca is of Albanian and Greek descent.

Talking about her education, she attended the American Conservatory Theatre to study acting.

Mariana Tosca’s acting career got a breakthrough with ‘Christmas in the Clouds’ in which she starred opposite to Graham Greene, Wes Studi, and M. Emmet Walsh.

Moreover, she has also made appearances in other TV shows and movies including ‘Superstore‘, ‘Masters of Sex’, ‘I Knew a Girl Named Hollywood’, ‘Parenthood’, ‘War’, ‘The Rites of Spring’, ‘John Carpenter’s Village of the Damned’, ‘So I Married an Axe Murderer’ and ‘The Doors’.

Tosca is also a producer. She co-produced and starred in an award-winning documentary about the mounting issues facing America’s horses named ‘Equine Destiny‘.

Currently, she is producing another exciting documentary named ‘Journey to Royal’ which is about an extraordinary story of WWII pilot Royal A. Stratton and the 4th Emergency Rescue Squadron.

In addition to this, she is still contributing a lot to social causes. She is the founder of the Los Angeles Homeless Coalition. The organization offered shelter, relief, and skills training to the homeless people of Los Angeles.

Moreover, she is a member of the Board of TheTenDollarClub.org. It is a non-profit organization that collects funds for poverty alleviation projects all around the world. So far, the organization has undertaken more than 100 projects in 70 different countries.

Furthermore, she has been serving on the Advisory Council of ‘Save the Chimps‘. It is the world’s largest chimpanzee sanctuary. It provides shelters and other facilities to hundreds of chimpanzees from the NASA space program.

Also, she is a member of the Advisory Boards of  ‘Elephant Voices and ‘DreamCatcher Wild Horse and Burro Sanctuary’ which have been saving elephants and horses respectively. Moreover, she is also on the Advisory Board of the ‘Rex & Friends Charitable Foundation’.

Tosca has an estimated net worth of around $5 million. However, she has not revealed her salary.

An average American actress earns around $65k per year.

Mariana has not been a part of any controversy. She has been working for great causes all her life and everyone is grateful for her work. Moreover, there are no rumors about her.

She has a height of 5 feet 10 inches. However, her weight remains unknown.

She has brown color hair and brown eyes.

She is active on social media sites.

You may also like to read the Bio, Family, Net Worth, Career, of Scottie Thompson, Josh Charles, Van Jones, and more.