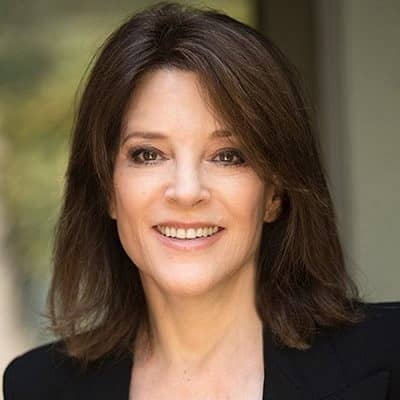 "It takes courage to endure the sharp pains of self-discovery rather than choose to take the dull pain of unconsciousness that would last the rest of our lives."

What is the relationship of Marianne Williamson?

In 1979, Marianne Williamson was married to a Houston businessman. Her husband’s name is not revealed. But according to her, the marriage lasted for a month. Marianne did not marry after that.

In 1990, she gave birth to her daughter India Emmaline. Emmaline studies doctorate in history at Goldsmiths College. Also, Marianne has been in a relationship with Hawk Koch, who is an American film producer and former president of Acadamy of the motion picture arts.

Who is Marianne Williamson?

Marianne Williamson is a political activist, bestselling author, and spiritual thought leader. Marianne is a leader in spiritual and religiously progressive circles.

She has also authored Project Angel Food, which is a volunteer sustenance delivery program that meets the needs of home-bound people that have HIV/AIDS and other viral diseases.

In 2004, she co-founded The Peace Alliance, a nonprofit grassroots education and advocacy organization focused on increasing U.S. government support of peace-building approaches to domestic and international conflicts.

Marianne Deborah Williamson was born on July 8, 1952, in Houston, Texas, United States. She was born to Samuel Williamson (father) and Sophie Ann (mother). Her father is a World War II veteran and immigration lawyer.

Whereas, her mother is a homemaker and community volunteer. She has a brother named Peter and sister Elizabeth. But, her sister has already expired.

Marianne was raised middle class in Conservative Catholic and Judaism. She went to Houston ISD’s Bellaire High School. Later, she studied theater and philosophy at Pomona College. Later, she dropped out of college in 1973.

In 1979, Marianne ran a metaphysical bookstore coffee shop. Later, she moved to Los Angeles to start a new one. There she got a job at the Philosophical Research Society.

As a part of the lecture, she has spoken about A Course in Miracles as a self-study program of spiritual psychotherapy. Additionally, she decided to stop teaching and join the ministry.

In a Unity Church, she became the spiritual leader. Moreover, she has 50,000 television viewers and 2,300 congregants. Later, she grew the church into one of the country’s biggest Unity churches.

Due to some issues, in 2003 she resigned from the Church Renaissance Unity Interfaith Spiritual Fellowship. If she did not design at the time she would be fired.

Marianne Williamson is also a best-selling author. She has written 13 books. Among them, 7 books have been on the New York Times bestseller list. She has written the books like Illuminata, A Woman’s Worth, A Politics of Love, etc.

Moreover, in the 1980s Marianne began founding charities based on principles in the Course. To support the HIV/AIDS patients, she launched Project Angel Food.

Marianne Williamson ran for California’s 33rd congressional district, in 2014. Therefore, she was both praised and criticized by the people. She launched the campaign on progressive issues. Like, LGBTQ equality, women’s reproductive rights, and finance reform.

Therefore, she collected $2.4 million, of which she contributed 25%. Unfortunately, she lost the general election to the top vote-getting Democrat from the primary. Williamson launched her presidential campaign, on January 28, 2019.

Besides that, she has done many other works for which she has been appreciated. She has supported free tuition at public colleges, community colleges, and trade colleges.

She supports paid leave, pay equity, union rights, and a universal basic income. Williamson supports the Medicare for All type of plan. She stated that she supports extending health coverage. Additionally, she also has been supporting The Equality Act.

Her net worth is estimated at $2 million USD. Williamson earns from her best-selling books, online courses, and speaking fees.

Williamson has been controversial due to her tweet. Her tweet made people feel offensive due to which she was dragged into a controversy. Later, she deleted the tweet. Besides, Marianne has always come forward to help the people. Likewise, she has been helping needy people for decades. And, people are remembering her for her good deeds.

Marianne Williamson is very pretty and beautiful. She stands at a height of  5 feet 7 inches and has an average weight of 60 kg. Williamson has brown eyes color and brown hair color. Other information regarding her body measurement is not revealed yet.