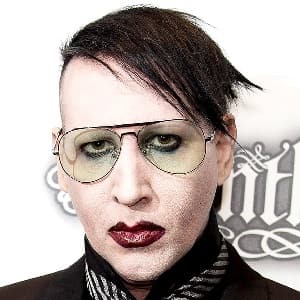 In the end we're all Springer guests, really, we just haven't been on the show.

Find out what's really out there. I never said to be like me, I say be like you and make a difference.

This is the culture you're raising your kids in. Don't be surprised if it blows up in your face.

Im not saying that when I perform I'm Barry Manilow, but I'm also not killing kids and beating up dogs and things like that.

Part of me is afraid to get close to people because I'm afraid that they're going to leave.

Marilyn Manson previously dated singer and fashion designer Lexa Vonn. Their relationship came to a rough end. Next, he also had an affair with journalist and author Wendy Moore.

During the early days of his music career, he dated Michele Greenberg. From 1992 to 1997, Manson was in a relationship with Missi Romero.

Manson also dated actress Jenna Jameson in 1997. From 1997 to 2001, he was in a relationship with actress Rose McGowan. The pair also got engaged after dating for about one and a half years.

Manson was also married to burlesque dancer Dita von Teese. The pair got married in a non-denominational ceremony at their home in November 2005. Their divorce was finalized in December 2007.

In 2012, Manson was involved in a relationship with singer and songwriter Lana Del Rey. At present, he is believed to be single.

Who is Marilyn Manson?

He is the co-founder and lead singer of the band Marilyn Manson. Additionally, he has also appeared in numerous movies and television series including ‘Lost Highway’ and ‘Bowling for Columbine’ among others.

Manson was born in Canton, Ohio on January 5, 1969, to parents Barbara Warner Wyer and Hugh Angus Warner. In his childhood years, he attended his mother’s Episcopal church.

He became interested in the world of music since his childhood years. He is of American nationality. Furthermore, he belongs to a mixed ethnic background of German, English, and Irish.

Their first album was titled ‘Portrait of an American Family’. They also released their second album, ‘Antichrist Superstar’, and the album debuted at No. 3 on the Billboard 200 chart. Apart from his musical career, Manson has also released his autobiography with rock journalist Neil Strauss, titled ‘The Long Road Out of Hell’.

Manson has also appeared in several movies and television series including ‘Salem’, ‘Let Me Make You a Martyr’, ‘Street Level’, ‘Sons of Anarchy’, ‘Once Upon a Time’, ‘Eastbound & Down’, ‘Californication’, ‘Wrong Cops’, ‘Number One!’, ‘Tim and Eric Awesome Show, Great Job!’, and ‘Rise: Blood Hunter’ among others.

Additionally, Manson also has 23 credits as a composer, 8 credits as a director, and 7 credits as a producer. In addition, he has also provided soundtracks in over 100 movies and television series. His other albums include ‘Antichrist Superstar’, ‘Holy Wood’, ‘Eat Me, Drink Me’, ‘Born Villain’, and ‘The Pale Emperor’ among others. Furthermore, Manson has also supported various charitable causes.

Manson has not revealed his current salary. However, he has an estimated net worth of around $25 million at present.

Manson became part of a controversy after Scott Putesky filed a $15 million lawsuit in a Fort Lauderdale court against him. Furthermore, he has been filed with several other lawsuits over the years. He stirred controversies after his name was linked to the 1999 Columbine High School massacre.

Talking about his body measurement, Marilyn Manson has a height of 6 feet 1 inch (1.85 m). Additionally, he weighs around 82 kg. Furthermore, his hair color is black and eye color is light Hazel.

Similarly, his Facebook page has more than 6.8M followers.