Mario Lemieux is a married man. He is married to Nathalie Asselin.

Mario first met Asselin when he was 16 and she was 15. They later went on to date and exchanged wedding vows on June 26, 1993. The couple has now been married for over 27 years.

From their relationship, they have four children. Nathalie gave birth to their first child, Lauren in April 1993. She then gave birth to Stephanie in 1995, Austin Nicholas in 1996, and Alexa in 1997.

The family lives in the Pittsburgh suburb of Sewickley. 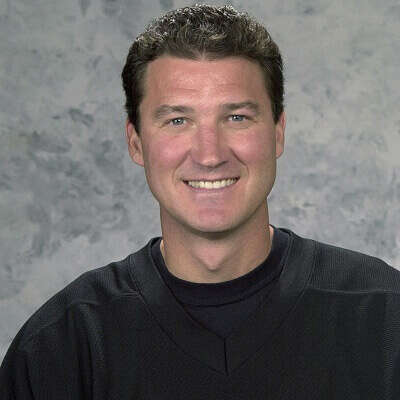 Who is Mario Lemieux?

Mario Lemieux is a Canadian former professional ice hockey player. Widely considered as one of the greatest ice hockey players of all time, he played 17 NHL seasons with the Pittsburgh Penguins. He won two Stanley Cups as a player and a further three titles as an owner of the ice hockey team.

Mario Lemieux was born in Montreal, Quebec, Canada on October 5, 1965. As of 2020, his age is 54. She was born to parents Pierrette Lemieux (mother) and Jean-Guy Lemieux. His mother was a stay-at-home mom whereas his father was an engineer.

He is the youngest of his parents’ three sons. He, along with his two older brothers, Alain and Richard grew up in a working-class family in the Ville-Émard district. Mario started playing hockey at age three in his basement before eventually playing with real equipment.

The three brothers used wooden kitchen spoons as sticks and bottle caps as pucks to play hockey and his father created a rink on the front lawn for them.

His ethnicity is French-Canadian.

Talking about his educational background, Mario left school after the tenth grade to focus on his hockey career.

After finishing his QMJHL career with 562 points in three seasons, he announced that he wanted to play for whoever drafted him in the 1984 NHL Entry Draft. He signed with the Penguins on a two-year contract for $600,000 in addition to a $150,000 bonus for signing.

In his first season, he played in the NHL All-Star Game and became the first rookie to be named the All-Star Game’s MVP. In 1989, his second five-goal performance helped secure a victory against Philadelphia Flyers and he tied the NHL record for most goals and points in a postseason game.

Injuries started to bother him and he underwent surgery to fix a herniated disk missing 50 games in the 1990–91 season but returned to lead the Penguins to their first-ever Stanley Cup by defeating Minnesota North Stars. The following season was also injury-plagued and he played only 64 games. Despite this, he helped to sweep the Chicago Blackhawks in the Stanley Cup Final.

In the 1996-97 season, he scored his 600th career goal in his 719th and went on to put up his tenth career 100-point season. Mario announced his first retirement in 1997 and was sorely missed by his team.

In 1999, the Pittsburgh team was in financial turmoil and faced bankruptcy. Lemieux, who was owed millions in deferred salary, bought the team. In 2000, he returned against the Toronto Maple Leafs. Despite playing just 43 games, he scored 76 points. The following season, he became the captain.

On January 24, 2006, injuries forced him to another retirement. With 915 games played, he scored 690 goals and assisted a further 1,033 more for 1,723 points becoming one of the greatest players ever to play the game.

Lemieux stands tall at a height of 6 feet 4 inches and weighs around 104 kg. He has a pair of blue eyes and brown hair.

As of 2020, Mario Lemieux has an estimated net worth of around $150 million. As an NHL player, he made $52 million. In addition to his salary, his stake in the team helped him to add nearly $200 million to his net worth.

Cancer and other Health Problems

In January 1993, he made a shocking announcement. The prolific player announced that he had been diagnosed with Hodgkin’s lymphoma. He was forced to undergo energy-draining radiation treatments missing two months of play during which the Penguins struggled. On the last day of his radiation treatment, he flew to Philadelphia and played against the Flyers. He even scored a goal in a 5-4 loss but the fans gave him a standing ovation and rightly so.

Lemieux’s career was plagued by health problems and injuries. Even with those problems, he managed to secure his name in NHL history as one of its finest ever players. His injuries limited him to 915 of possible 1,430 games. His numerous ailments included Hodgkin’s lymphoma, spinal disc herniation, chronic back pain, chronic tendinitis of a hip-flexor muscle, etc.

You may also like to read the Bio, Career, Net Worth, Relationships, and more about Nathalie Asselin, Brady Quinn, Matthew “Matt” Stajan, and more.