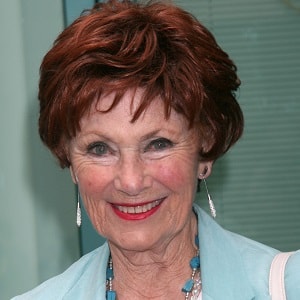 “People have different opinions about this, but I'll use it to my advantage. If I call the plumber and he says, "I can't come right away", I'll say, "Did you ever watch Happy Days (1974)? I'm Mrs. C, you know". And not only does he get over here right away, but he brings his entire family.”

Marion Ross was married to Freeman  Herman Meskiman, Jr. in 1950. They welcomed Their first child Jim Meskimen and later welcomed their second child Ellen Kreamer. Jin is an actor and Ellen is an actress. The couple could not hold the relationship and their relationship with divorce in 1968.

Who is Marion Ross?

Marion Ross is a retired American actress and she is famous for her role as Marion Cunningham on the ABC television sitcom ‘Happy Days’.  She starred in the sitcom from 1974 to 1984. She received two Primetime Emmy Award nominations for the sitcom. She is also best known for her voice role on animated televisions series like ‘King of the Hill’ and ‘SpongeBob SquarePants’ and as recurring roles on ‘The Drew Carey Show’, ‘The ‘70s Show’, ‘Brothers & Sisters’.

She was born on October 25, 1928, in Watertown, Minnesota, U.S.A. Her birth name is Marian Ross and she is currently 90 years old. Her father’s name is Ellen (Hamilton) Ross and her mother’s name is Gordon Ross.

Her parents are the natives of Saskatchewan, Canada. She shifted from Waconia to Willmar and eventually to Alberta Lea, Minnesota. She changed her name from Marian to Marion at the age of 13 as she thought it would be better on a marquee.

She completed her sophomore year in high school and made her way to Minneapolis, Minnesota and studied drama at the MacPhail Center for the Arts and later attended Southwest High School. She was graduated from Point Loma High School in San Diego. After she made her enrolment in San Diego State University, she was named the school’s most outstanding actress.

She performed in summer theatre in La Jolla, California after her graduation in 1950. She was recommended to try for work in films by the director.

She debuted on television in 1953 from the series ‘Life With Father’ and worked there for two years. She made her appearance on ‘The Lone Ranger’ in 1954, ‘Mickey Spillane’s Mike Hammer’ and ‘The Donna Reed Show’ in 1959.

She made her recognition more famous after the sitcom ‘Happy Days’ which aired for 11 episodes on ABC from 1974 to 1984. Later, she appeared on ‘The Love Boat’ between 1978 and 1986 and starred in the comedy-drama ‘Brooklyn Bridge’.

She made her appearance as a housekeeper in ‘The Evening Star’ and gave her voice as Ms. Wakefield on the Fox animated series ‘King of the Hill’, as Cranes mother on ‘Kung Fu Panda: Legends of Awesomeness’, as Grandma SquarePants in ‘SpongeBob SquarePants’, and many more.

Marion announced her official retirement from acting in 2018.

She has an estimated net worth of around $10 million and her main source of income is from her professional career.

Ross along with four of her ‘Happy Days’ co-stars filed a $10 million breach-of-contract against CBS on April 19, 2011. They were supposed to be 5% of the net proceeds of merchandising if their sole images were used and 50% if they were in a group. They claimed they owed millions but CBS told they only owed the actors $8500 and $9000 each. But, the judge rejected the group’s fraud claim in October 2011 and denied a motion filed by CBS to have the case thrown out on June 5, 2012, and it would go to trial on July 17. Finally, in July 2012, the actors settled their lawsuit with CBS and each received a payment of $65,000 and a promise to continue honoring the terms of their contracts.