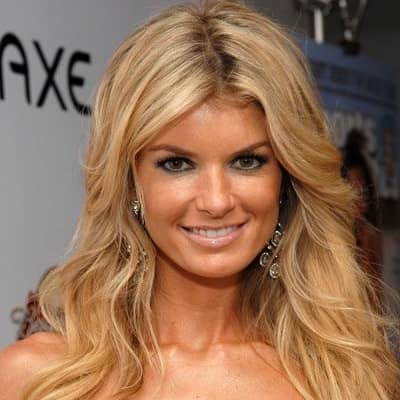 Marisa Miller’s current relationship status is married. She is married to Griffin Guess, a music producer.

Previously, Marisa was married to surfing promoter Jim Miller. They met in 2008 and started dating. The couple married in 2000 but separated in 2002.

From 2002 she dated an American auto racer, Dale Earnhardt Jr. for a year.

In 2009, she was rumored to be dating the basketball player, Derrick Rose.

Who is Marisa Miller?

Marisa Miller is an American model and occasional film actress.

She is best known for her appearances in the Sports Illustrated Swimsuit Issues and her work for lingerie retailer Victoria’s Secret.

Marisa was born on  August 06, 1978, in Santa Cruz, California, USA. Her father’s name is Marc Bertetta and her mother’s name is Krista Useldinger.

She holds an American nationality and is of mixed (English and Scottish) ethnicity.

Miller completes her schooling from Aptos High and has her further education from Monte Vista Christian School.

Marisa Miller was discovered by two Italian modeling agents, walking through San Francisco cafe when she was sixteen yrs old. Then she gained her fame by being featured on the cover of Perfect 10.

Consequently, her career in modeling started and she did editorials for American and Italian editions. After that, she has been featured in various popular magazines such as Cosmopolitan, GQ, FHM, Playboy, DT, Marie Claire, Ralph, Shape, Self, Glitter, Maxim, Fitness, Women’s Health, and others.

Marisa worked for Victoria’s Secret from 2002 to 2009. She became VS Angel in 2007 and was also chosen to wear “Fantasy Bra” for the Victoria Secret Fashion Show in 2009. The garment weighed 150 carat and worth $3 million.

She also poses for Sports Illustrated Swimsuit issues from 2004 to 2008. Maris was voted no 1 in Maxim magazines among Hot 100 Women list. Consequently, in the year 2010, she became third in Sexiest Women in the World poll. It was organized by the FHM magazine’s UK edition for the 16th annual year.

The same year she also became the first spokeswoman for Harley Davidson in the company’s 100-year history.

She made her film debut as Roy’s avatar in the 2013 Ryan Reynolds feature movie, R.I.P.D. The model was the judge of Manhunt: The Search for America’s Most Gorgeous Male Model in 2004. Consequently, she appeared as a guest judge on America’s Next Top Model.

Her debut television appearance was on a fashion show Ready to Wear – Spring / Summer 2004 in which she advertised for Betsey Johnson.

Miller also made a short appearance in the finale of the VH1 reality show The Shit and CBS comedy How I Met Your Mother. She played a minor role in an episode of Gary Unmarried.

The model appeared in the “Spin You Around” music video by Puddle of Mudds in 2004. In the year of 2010, she designed and released a paddleboard line with Surftech which is aimed at female riders.

Marisa is also a philanthropist. In 2009, she became the ambassador for the American Cancer Society. Furthermore, she encourages the woman suffering from breast cancer through the Young Survival Coalition. She is an ambassador of USO and frequently visits military bases and receives tons of fan mail from the American troops.

She also helps to preserve beaches, oceans and involves in various environment conservation programs through the Surfrider Foundation.

Being one of the successful personality, her net worth is around $20 million. The model owns a Harley Nightster motorcycle and loves to ride it.

Marisa was rumored to be dating the basketball player, Derrick Rose. The rumors rose after an NBA event when she nominated Derrick among Chicago’s sexiest athletes.

Marisa Miller has a slim maintained figure with a height of 5 ft 8 in (173 cm) and weighing 55kg (121 pounds). She has long blonde colored hair with hazel eyes.

Furthermore, she has her own YouTube channel with over 9.32K subscribers.

Also, get to know the bio of other models like Charlie Riina, Alison Waite, and Roos van Montfort.

NBA’s Most Valuable Player of 2011, Derrick Rose is a father of a child now…