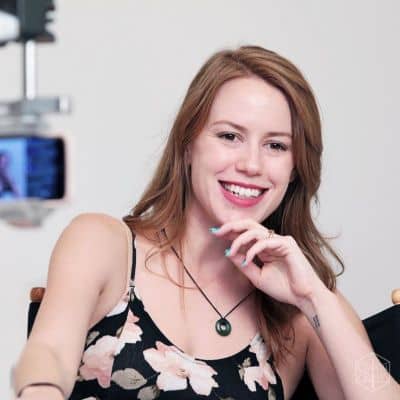 Talking about her love life, Marisha Ray is happily living a married life with her long-time partner, Matthew Mercer. Matthew is a well-named American voice actor known for his work with Studiopolis, Viz Media, Bang Zoom! Entertainment, Funimation, and so on. The duo tied the knot on 21 October 2017.

Ray announced her engagement with her partner on 24 October 2016. They had a private wedding ceremony with the involvement of close friends and relatives. They live together without any sign of controversy or rumors at present.

Who is Marisha Ray?

Marisha Ray is a well-recognized American voice actress, host, and producer. Ray is widely famed for her roles as herself, as well as her characters Keyleth and Beauregard, on the Dungeons & Dragons web series, Critical Role.

Moreover, she also played as a voice actor in Perona 4 Arena Ultimax and Persona Q video game, Laura S. Arseid in The Legend of Heroes: Trails of Cold Steel series, and Miranda in Metal Gear: Survive.

Marisha Ray was born on 10 May 1989. At present, her age is 32 years old. Likewise, her birthplace is Louisville, Kentucky, the USA.

Marisha has been secretive towards her parent’s details. Her mom is a dog groomer and her dad sells truck tires. Moreover, she has a younger sister who is still in high school.

Talking about her nationality, Ray holds an American identity whereas her ethnicity is Caucasian.

Regarding education, the star started studying acting at the Actors Theater of Louisville. In 2008, Ray shifted to Los Angeles to pursue her career in the entertainment industry. There she took up street performing on Hollywood Boulevard by tap-dancing for a short time.

The actress learned her acting from the American Academy of Dramatic Arts. Later, she completed her graduation from Park University in Pittsburgh in 2007.

Professionally, Marisha began her career at the early age of 12. She was a regular actress and a dancer at theatres. After some time, Ray started working in the acting profession. She featured in small roles before landing a role in Night Out: Vampires and Walk of Shame. She also produced a Batgirl fan series in 2012 named Batgirl: Spoiled.

Moreover, in 2015, Marisha started co-featuring the web series, Critical Role. Ray announced her appointment to the post of creative director for Geek & Sundry on 28 July 2017. Later, she stepped down from the position in June 2018.

Marisha also became the creative director for the company. Later, they raised $750,000 on Kickstarter to create an animated series of their prime campaign. Ray is also known for work in Little Ceasars Pizza, Mega, The Buried Life, etc.

The actress is known for her role in Night Out: Vampires, Whoreders, Walk of Shame, How to Survive a Horror Film, and Written by Kids. She also earned a Best Writing award by the LA Webfest Awards in Horror Series for writing few episodes of a horror web series, 8:13.

A multi-talented star, Ray has earned a handsome amount of money from her profession. She has been active in her profession from the year 2010 till the present.

It is reported that Marisha Ray has an estimated net worth of $100k-$1 million. She lives a luxurious lifestyle along with her husband.

Marisha has never been part of any controversial matter or rumors till now. The star has been preoccupied with her professional and private life.

It seems that Ray prefers enjoying her personal life and does not want to merge it with her professional life.

32 years old star, Marisha has gorgeous looks and an admirable personality. She stands at a height of 5 feet 6 inches. Also, she has a balanced bodyweight of 55 kg.

Furthermore, Ray has dark brown eyes whereas her hair is blonde.

Regarding her social media presence, Marisha Ray is an active personality on social media. Marisha has more than 323k followers on her official Instagram account @marisha_ray.

She is also active on Twitter with around 417.7k followers.

However, Ray is not available on Facebook at the moment.