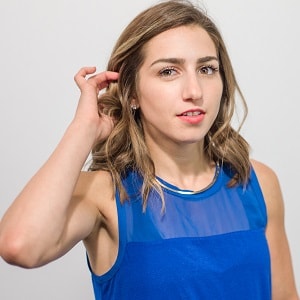 Marissa Castelli is living her single life. she has not mentioned any information regarding her affair and relationship.

Who is Marissa Castelli?

Marissa Castelli is an American pair skater and she is the 2017 U.S. national silver medallist with her partner, Mervin Tran.

She was born on August 20, 1990, in Providence, Rhode Island. She is 28 years old. Her birth sign is Leo. Her mother, Lori Castelli, is a figure skating coach and her brother, Anthony Castelli, is a football player.

She holds American citizenship and her ethnicity is a mix of Italian / Cambodian, Vietnamese.

She was graduated from Cranston High School West and enrolled at the Community College of Rhode Island. Later, she studied sales and marketing at DeVry University.

She started skating at the age of three and she enrolled in U.S. Figure Skating’s Basic Skating program at the age of five. She competed as a single skater and skated pairs with Brad Vigorito in her early career.

She became a partner with Simon Shnapir in April 2006 and they took training in  June. They were coached by Bobby Martin, Carrie Wall, Mark Mitchell, and Peter Johansson in Boston. She broke Shnapir’s nose once they were practicing the twists.

The pair got qualified for the 2008 Junior Grand Prix Final and placed sixth and also won the bronze medal at the 2009 World Junior Championships. She collided with an Italian while she was skating backward and landed on his blade and resulted in 15 stitches in her inner thigh in the 2009-2010 season. The pair became tenth at the 2010 Four Continents Championships.

The pair split up in 2012 for a month but again recommitted and won gold at the 2012 Ice Challenge and won bronze at the 2012 NHK Trophy. Also, they won their first national title at the 2013 U.S. Championships.

They got their second national title at the 2014 U.S. Championships and were named the team to the 2014 Winter Olympics which was held in Sochi, Russia in February. The pair finished 11th at the 2014 World Championships in Saitama, Japan and announced their partnership on May 7, 2014.

Later, she made her partner Mervin Tran on June 10, 2014, and trained under Bruno Marcotte in Montreal. The pair won the bronze medal at the 2016 CS Autumn Classic International and appeared at two Grand Prix events. They became 7th at the 2016 Skate America and 5th at the Trophée de France. She accidentally struck Tran during training with her elbow in late December.

There is no updated information available about her net worth, salary, and income. However, it is under review.

She is very secretive about her personal information. She has not been involved in any rumors, controversies, and scandals till date.

She has a height of 5 ft. She has got dark brown hair and dark brown eyes. Other information regarding her weight, dresses size, shoe sizes, etc. are unknown.