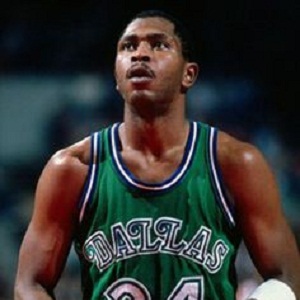 Mark Aguirre is a married man. He is married to his longtime girlfriend, Angela Bowman. The couple tied the knot in the year 1988. The couple is blessed with a beautiful daughter. They have ket her name, Angelei Aguirre. He is living happily with his wife and daughter.

Who is Mark Aguirre?

Mark Aguirre is an American retired basketball player in the National Basketball Association.

Aguirre played from 1981–1994 and won two championships with the Detroit Pistons after being sent to Detroit from the Dallas Mavericks in exchange for Adrian Dantley. Aguirre was a three-time All-Star for Dallas. He currently is a coach.

Aguirre was born Mark Anthony Aguirre on December 10, 1959, in Chicago, Illinois. His nationality is American and his ethnicity is Afro-American.

His mother’s name is Mary Aguirre and his father’s name is unknown. His father was born in Mexico. Nothing other information on his parents, siblings, etc. is known to the media yet.

He attended Westinghouse high school in Chicago, while the University of DePaul University from 1978-1981. Aguirre began playing basketball from his early school days.

Aguirre started his professional career after The Dallas Mavericks selected him as the first overall pick in the 1981 NBA draft and remained with the Mavericks until 1989.

In his first season, Aguirre was limited to 51 games. The Mavericks improved by 13 games in the win column and finished ahead of the Utah Jazz, but were still twenty games behind division-leading San Antonio Spurs.

Beginning with the 1982–83 season Aguirre reeled off six straight campaigns. In the first of those seasons, he scored 24.4 points per contest, tops on the team and sixth in the league. The Mavericks continued their ascent to finish ahead of Utah and the Houston Rockets in the Midwest Division.

Although Aguirre was the Mavericks’ main weapon, he was helped by the emergence of Rolando Blackman and the contributions of role players Brad Davis and Pat Cummings. Dallas finished second in the Midwest, and the team made its first playoff trip, beating the Seattle SuperSonics in the opening round before losing to the Los Angeles Lakers in the conference semifinals.

In 1984–85 the Dallas made a quick exit from the playoffs, bowing to the Portland Trail Blazers in the first round; in 1985–86 they defeated Utah and then took the Lakers to six games in the conference semifinals. Aguirre averaged 25.7 and 22.6 points for those seasons.

In 1986–87 and 1987–88, he made the All-Star Team. The Mavericks won more than 50 games each year. The 1987–88 edition of the franchise went 53-29, beat Houston and the Denver Nuggets in the first two rounds of the postseason, then extended the Lakers to seven games before losing in the Western Conference Finals. It was the longest postseason run in the Mavs’ eight-year history.

Both Maverick’s single-season scoring records still stand. His 13,930 points as a Maverick rank third in the franchise’s history, behind Rolando Blackman and Dirk Nowitzki as of June 14, 2014.

While Aguirre’s time in Dallas was full of high-scoring efforts and playoff visits, the Mavericks were postseason underachievers, and Aguirre had repeated conflicts with coach Dick Motta and players like Blackman, Derek Harper, and James Donaldson.

Then-team owner Donald Carter, who was a huge fan of Aguirre, hoped he would remain in Dallas for his entire career, but eventually conceded that the gulf between Aguirre and the team was unbridgeable. Midway through the 1988–89 season, Aguirre was traded to the Detroit Pistons for Dantley, who was also one of the league’s top scorers, and a first-round draft pick on February 15, 1989.

After Aguirre joined the Detroit Pistons, the Pistons won the NBA title in 1988-89 and repeated as champions in 1989–90. He showed he could blend into a successful team by taking fewer shots, playing hard on defense, and not complaining when Rodman’s minutes increased greatly over time. In the 1990 playoffs, which culminated with a five-game Finals win over Portland, Aguirre averaged 11.0 points.

Aguirre played three more seasons with the Pistons in an increasingly limited role, due to both Rodman’s play and his own age and injury issues. In 1993, the Pistons released Aguirre, and after he cleared waivers the Los Angeles Clippers signed him for $150,000 for a partial campaign in 1993–94. Through the 1993–94 season Aguirre had accumulated 18,458 points for a career average of 20.0 points per game. He retired in 1994.

Aguirre began his coaching career in 2002 with the Indiana Pacers. He remained there for one season and moved to the New York Knicks. Mark coached the team to the season of 2008.

Aguirre, at one point, considered playing for Team Mexico at the 1992 Olympics.

He was inducted into the College Basketball Hall of Fame in 2016.

Mark Aguirre: Salary and Net Worth

While his salary is not known, he has a net worth of $3 million.

He has black hair color and his eye color is also black. There is no information about his shoe size and body weight.