Mark Deklin is a well-recognized American actor and fight coordinator. Mark Deklin is happily married to Jamie Karen Goldberg and is the father of two kids.

Talking about his love life, Mark Deklin is happily married to his partner, Jamie Karen Goldberg. The couple tied the knot in October 2006.

Presently, they have two children, a daughter named Kylie Deklin and a song named Julian Deklin. They reside in Los Angeles along with their dogs. 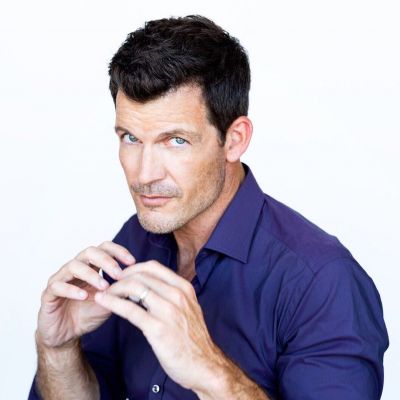 Who is Mark Deklin?

Mark Deklin is a well-recognized American actor and fight coordinator.

Mark Deklin was born on 3 December 1967. At present, his age is 54 years old. Likewise, his birthplace is Pittsburgh, Pennsylvania, USA.

Mark is the son of his father, Norman Schwotzer whereas his mother’s details are still missing.

Talking about his nationality, Deklin holds an American identity whereas his ethnicity is Caucasian.

Regarding education, the actor earned his graduation from Thomas Jefferson High School in 1986. He also earned a B.A. in English and History from the Pennsylvania State University.

Deklin then took his M.F.A. in acting from the University of Washington in Seattle. He is a certified member of the Society of American Fight Directors.

Mark is a classically-trained stage actor and a stunt performer as well. He has worked on Broadway and off-Broadway too. Deklin performed the reoccurring role as Dr. Matthew Shaw in the Fox series, Justice from 2006 to 2007. Delkin then featured as Elliott Mayer in the CBS sitcom The Ex List in 2008.

The actor has also portrayed the role of Stan Edwards in the CBS drama, Hawaii Five-O from 2011 to 2012. Mark featured as Joe Nazario in the NBC drama Shade of Blue in the year 2015.

Some of his remarkable roles are Agent Cameron Davies in the TNT series Rizzoli & Isles in 2016, as Dr. William Landon in the TNT procedural Major Crimes in 2017, and as Roy in the Netflix comedy Grace and Frankie from 2018 to 2019.

The talented star has also voice roles in many video games such as Call of Duty 3, Metal Gear Solid: Peace Walker, God of War: Ghost of Sparta, and Halo Wars 2. He has co-featured in the films like Riverworld, Tarzan, The Wish List, Tides of War, The Wedding Chapel, Switched for Christmas, The Answer, and Mini’s First Time.

Some of his remarkable roles are Sex and the City, Charmed, Fraiser, CSI: Crime Scene Investigation, Desperate Housewives, Nip/Tuck, Two and a Half Men, and so on.

A talented American star and fight coordinator has earned a handsome amount of money from his profession. He has been active in his profession from the year 1994 till the present.

It is reported that Mark Deklin has an estimated net worth of $1.5 million as of 2022.

Mark has never been part of any controversial matter or rumors till now. The actor has been preoccupied with his professional and private life.

It seems that Deklin prefers enjoying his personal life and does not want to merge it with his professional life.

53 years old star, Mark has dashing looks and an admirable personality. He stands at a height of 6 feet 1 inch. Also, he has a balanced body weight of 85 kg.

Furthermore, Deklin has blue eyes whereas his hair is black.

Regarding his social media presence, Mark Deklin is an active personality on social media. Mark has more than 11.7k followers on his official Instagram account @markdeklin.

He is also active on Twitter with around 11.7k followers.

Moreover, Deklin is also available on Facebook with nearly 3.2k fans and supporters.