Well known for appearing as Adam Newman on the soap opera The Young and the Restless in 2019.

Mark Grossman is in a relationship with Sharon Case. She is also an actress and model.

The couple was spotted together and their dating rumors were spread. However, they officially declared their relationship in Sep 2019.

They also appeared together in the 90210MG podcast hosted by Jennie Garth and Tori Spelling. 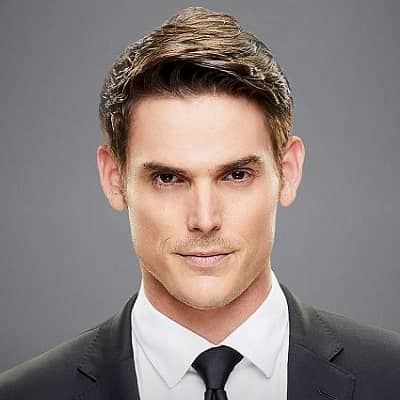 Who is Mark Grossman?

Mark Grossman is an American actor. He is well known for appearing as Adam Newman on the soap opera The Young and the Restless in 2019.

The actor was born on February 3, 1987, in Columbia, Maryland, the U.S. He grew up in Arizona and started performing from his young age.

The names of his parents are not known yet. Likely, he hasn’t mentioned any information regarding his childhood and siblings also.

He completed his high school education and moved to pursue his career. Mark is of German and Polish descent.

The actor debuted into acting performing various minor roles in the movies. He professionally began acting in 2012. In his initial days, he has worked for films short like  Choices Made, The Snow Globe, and Maybe Tomorrow.

Likely, he then played Wyatt in the 2013 zombie Western Walking Dead In The West. Mark then worked in various short film roles in movies like Edgar Allan Poe’s The Cask The Stranger, James Joyce’s Two Gallants, and James Joyce’s After the Race.

Talking about his television work, he debuted as Dan in the British crime drama series Hustle on BBC One. He is popular for his roles in movies as Silent Hill Internal Prison, Seven Hours in Heaven, Entourage, Break-Up Nightmare, Stasis, Gets Big, Ouija House, and Nightmare Cinema.

In the year 2018, Mark appeared as Shane / Landon in the Freeform drama series Famous in Love. Next year he gets to work in the long-running CBS soap opera The Young and the Restless in 2019. He has totally appeared in 371 episodes up to date.

Mark has also received honors for his works. He was nominated “Outstanding Performance by a Supporting Actor in a Drama Series” in a Daytime Emmy Award in 2020.

The reports were that Mark is bidding goodbye to the iconic show, The Young and The Restless. The news was in the media in April 2021. This created a great buzz as he is leaving the show in between. And now the makers will have to find the suitable match for his character Adam Newman.

The actor stands tall at a height of 6 feet and 1 inch (1.85m). With a fair complexion, Mark has brown-colored hair and dark brown eyes. Moreover, he also maintains a good physique.

You may also read the bio of Max Walker, Spencer Garrett, Wes Brown, and Anna Wood.

Cameron Douglas
Tags : American Actor Famous in Love The Young and the Restless