Mark Hamill is an American actor. He is married and a father of three. 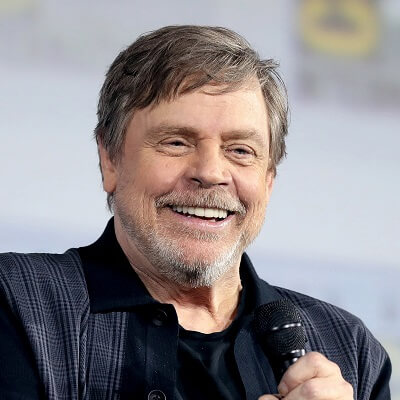 Believe in Yourself! Work Hard, Never Give Up &

Anything's Possible! OR Kick Back, Relax&

Mark Hamill is currently married. He is married to Marilou York who worked as a dental hygienist. The couple exchanged wedding vows on 17 December 1978 and have been married ever since.

His eldest son, Nathan was born in the UK while his father was on location shooting Star Wars: Episode V – The Empire Strikes Back (1980).

He has previously been in a serious relationship with actress Anne Wyndham who was his co-actor from ‘General Hospital’.

Who is Mark Hamill?

Mark Hamill is an American actor, voice actor, and writer. He is famous for his portrayal of the lead character, Luke Skywalker in the Star Wars film series.

As the lead character of the fifth-highest-grossing media franchise of all time, Hamill was and is extremely popular all over the world.

Mark Hamill was born as Mark Richard Hamill in Oakland, California, on September 25, 1951. As of 2021, his age is 69. He was born to his parents Virginia Suzanne (mother) and U.S. Navy Captain William Thomas Hamill (father). His father was a US Navy Captain. Due to his father’s changes in the station, his family moved to different places and he switched schools very often.

He is one of his parents’ seven children and has two brothers, Will and Patrick, and four sisters, Terry, Jan, Jeanie, and Kim.

His ethnicity is English, Scottish, Irish, Swedish, and Welsh.

Talking about his educational background, he went to Walsingham Academy and Poe Middle School. After that, he went to James Madison High School and Annandale High School. Later, he joined Nile C. Kinnick High School from which he completed his high school studies.

Following that, he enrolled at Los Angeles City College where he majored in drama.

After landing roles in different series and television films including ‘General Hospital’, ‘Room 222’, ‘One Day at a Time’, ‘The City’, etc, he finally got his breakthrough role of Luke Skywalker in Star Wars.

The movie was released in May 1977 to huge and overwhelming success. He also made appearances in Star Wars Holiday Special a year later. Following that, he starred in The Empire Strikes Back and Return of the Jedi. Moreover, he portrayed Luke again in Star Wars: The Last Jedi in 2017. Furthermore, he also portrayed Skywalker for the last time in Star Wars: The Rise of Skywalker.

His portrayal of Luke Skywalker made him one of the most famous, sought-after movie stars in the world at that time.

He also appeared in several other movies including ‘Slipstream’, ‘The Guyver, and ‘Timerunner’ in the early 1990s. From 1992 to 1994, he gave voice to several characters, most famously, the malicious famous supervillain ‘The Joker’ in the animated TV series, ‘Batman: The Animated Series. He received very positive reviews for his voicing of the villain and he reprised the role in the critically-acclaimed ‘Batman: Mask of the Phantasm’.

Some of his other movies he worked in include ‘Watchers Reborn’, ‘Wing Commander’, ‘Sinbad: Beyond the Veil of Mists’, ‘Batman Beyond: The Return of the Joker’, ‘Comic Book: The Movie’, ‘Ultimate Avengers II’, and ‘Scooby-Doo: Camp Scare’ (2010).

Hamill stands at a height of 5 feet 7 inches and weighs around 73 kg. He has blond hair and blue eyes.

Mark Hamill has an estimated net worth of over $18 million as of 2021. For his starring role as Luke in the first Star Wars film in 1977, he was reportedly paid $650,000 which was a lot compared to today.

In October 2019, he faced major backlash in social media after he directed a hostile tweet towards Ivanka Trump.

Ivanka had shared an image of her family on Twitter in which her youngest son, Theodore, was pictured in a Stormtrooper costume from the Star Wars franchise.

“The Force is strong in my family”.

A day later, Hamill replied and wrote “You misspelled ‘Fraud’” referring to the accusations of collusion made against Donald Trump. He quickly faced backlash for ‘blasting a three-year-old for who his grandfather is.

During the time between the first two Star Wars films, Hamill had a serious automobile accident during which he fractured his nose and left cheekbone. However, rumors circulated making the injury look much worse than it really was. The rumors even suggested that he required plastic surgery on his face.

You may also like to read the Bio, Career, Net Worth, Relationships, and more about Indi Star, Nathan Hamill, John Boyega, and more.