Updated On January 29, 2023 | Published By: Helen Fell
Share this
Married 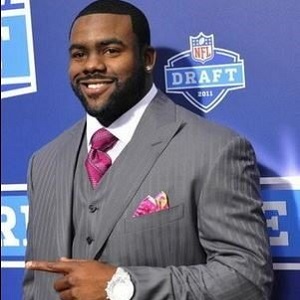 I'm bout that im outside the bank and if anyone got anything to say come see me. I would like to welcome the MVP frontrunner LAMAR JACKSON in da flesh big truss wooh wooh

What is the relationship of Mark Ingram?

Tall and handsome Mark is a married person. He was married to a professional fitness model, Chelsea. The couple tied the knot in April 2017.

The couple has already welcomed one baby girl, Myla Ingram. And there are no records of the past relationships of Mark. Currently, he is living happily with his wife and children.

Who is Mark Ingram?

Mark Ingram is an American football running back for the New Orleans Saints of the National Football League (NFL).

He played college football at the University of Alabama, won the Heisman Trophy, and was a member of a national championship team.

Ingram was born on 21 December 1989, in Hackensack, New Jersey. As of 2021, he is 32 years old. His nationality is American and his ethnicity is African.

He is the son of former NEL great for the New York Giants, wide receiver Mark Ingram Sr.(father), and Shonda Ingram(mother). He has three sisters namely Malia Ingram, Miya Ingram, and Mia Ingram.

In which school did Mark Ingram attend?

Ingram received an athletic scholarship to attend the University of Alabama Crimson Tide football team from 2008 to 2010.

Ingram played behind Glen Coffee in his freshman year, and he was selected to the 2008 SEC all-freshman Team. He was put on the cover of NCAA Football.

He was named SEC Offensive Player of the week. In the 2009 SEC Championship Game versus the undefeated and top-ranked Florida Gators.

On December 12, Ingram won the Heisman Trophy in the closest vote in the award’s 75-year history.

Ingram was Alabama’s first Heisman winner, the third consecutive sophomore to win the award, and the first running back to win the award since Reggie Bush. On January 6, 2011, Ingram announced he would forgo his senior season and enter the 2011 NFL Draft.

The next day Ingram agreed with the Saints on a four-year contract, with three years guaranteed and a fifth-year option. The contract is worth $7.41 million, with a $3.89 million signing bonus.

He finished the season with a career-high 1,043 rushing yards on 5.1 yards per attempt and added an additional 319 receiving yards to go along with 10 total touchdowns.

Mark Ingram: Salary and Net Worth

According to the rumors, NFL players react to Mark Ingram, the Saints being turned away from the London club. And also Mark Ingram returns to the Saints on a four-year deal and his contract with New Orleans is for $16 million over four years.

How tall is Mark Ingram?

Moving towards his body measurements, he has a good height of  5 feet 0 inches (1.52m).

He has black hair color and his eye color is also black. His bodyweight is 98kg.

Also get to know more about the birth facts, education, career, net worth, rumors, height, and social media of different personalities like Christian McCaffrey, Derrick Henry, and Ian Johnson.