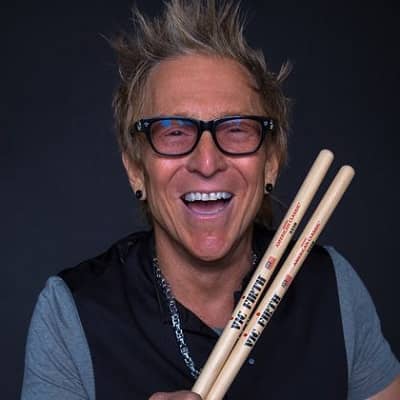 Mark Schulman is a married man. He is married to his wife Lisa Skarell Schulman. The couple tied the knot in 2007 and is happily living up to now. There are not many details about their marriage.

Mark mentioned their marriage from an Instagram post wishing them their 13 yrs anniversary. The pair has a daughter Zade Schulman born around 2010.

The 10 yrs old Zade owns her own jewelry company on Etsy and even designs on her own. Mark mention it on his Instagram and called him a proud father.

The family often goes on vacation and post various pictures together.

Who is Mark Schulman?

Mark Schulman is an American musician, Drummer, Speaker, and Author. He has a part in various music tours and performed with Cher on her D2K Tour.

Schulman is a session drummer as well as a music producer, audio engineer, and co-owner of “West Triad Studios”. Mark is now the drummer for P!nk’s band. In 2014, he was voted ‘Top 3 Pop-Rock Drummers’ in the Modern Drummer Reader’s Poll.

Likewise, the drummer was featured cover artist in the May 2019 issue of Modern Drummer.

Mark seems to have a close bond with his parents. He often posts their pictures and mentions that he missed them. Both of them were college English professors and have passed out.

His mother’s name is Sandy Schulman. She passed away two years ago. Mark mentioned it via Instagram post and also shares his feeling. And his father’s name is Ben Schulman.

Mark Schulman was interested in music from his childhood. His uncle was his teacher and introduced him to drumming. Mark got his first drum when he was just nine yrs old. His parents have also always supported him regarding building his career upon his interest.

In which school did Mark Schulman attend?

Mark Schulman has his schooling at El Camino Real Charter High School. Then he completes his studies at James Cook Boys Technology School.

Mark Schulman used to play and also conduct the orchestra in LA Junior Philharmonic in school days. Between in the mid-1990s, Mark was the drummer for the band Simple Minds for their album Good News from the Next World. They also toured together for the album.

Mark owns West Traud Recording Studio of Venice, California. He even work as a music producer, trained audio engineer in the studio. Being an active educator, he taught at the Los Angeles Music Academy.

His first DVD in his studio ‘A Day in the Recording Studio; A Do-It-Yourself Guide to Recording Great Drum Tracks for Drummers and All Musicians’ was distributed by Hudson Music.

In 2013, he appears in an interview for the German magazine, Sticks. He’s been the drummer for some of the greatest musical artists in history, including Foreigner, Cher, Billy Idol, Stevie Nicks, Simple Minds, Beyoncé, Tina Turner, Velvet Revolver, Dave Koz, and many more. He works as the drummer of P!nk now.

In Gretsch’s history, Mark is regarded as one of the best-selling signature products.

Mark has been working as a world-class rock and pop artist for the last 30 years. He has earned a net worth of around $1 million to $5 million.

Mar owns his own studio. He earns from his albums & merchandise. He sells drum sticks, his autographed book (Conquering Life’s Stage Fright: Three Steps to Top Performance), musical instruments, and so on from his website.

Mark Schulman stands with a height of 5 feet and 2 inches with a body mass of around 60 kg.

With blond hair, he has dark brown eyes. He often wears various specs including his musical performance time.

You may also read the bio of Zac Brown, Jacob Davich, Justin Cassotta, and Mo Gilligan.

Soon To Hear A Wedding Bells!! Nev Schulman Reveals The Date Of His Wedding With His Fiance; The Couple Is Also Blessed With The Cute Baby Girl