Mark Steyn is a Conservative commentator. Mark is married and father of three kids. 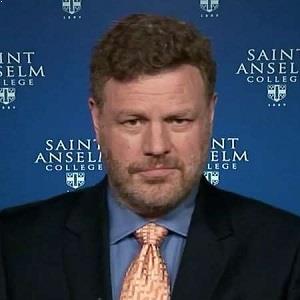 The minute health care becomes a huge, unwieldy, expensive government bureaucracy it's a permanent feature of life and there's nothing anyone can do about it

Government health care changes the relationship between the citizen and the state, and, in fact, I think it's an assault on citizenship.

Mark Steyn got married to an editor. However, there is no information about his wife. They have thee children and they live happily in Woodsville, New Hampshire.

At first, he met her at the Independent. Mark and his wife are Catholic.

The couple look extremely good together and are having a great live a head.

Information regarding any past relationships that Mark might have been involved in is not available.

Who is Mark Steyn?

Mark Steyn is a Canadian author, writer, and conservative political commentator. He has written five books, including ‘America Alone: The End of the World as We Know It’.

Additionally, his articles and columns have been published in newspapers nationally.

Mark Steyn was born in Toronto, Canada on December 8, 1959. His mother’s family was Belgian. In addition, he has baptized a Catholic during his childhood and later confirmed in the Anglican Church.

He is of Canadian nationality and Caucasian ethnic background. Information regarding Mark’s early life is missing at the moment.

He attended the King Edward’s School, Birmingham. Later, he left school at age 16. In addition, he held a Eugene C. Pulliam Visiting Fellowship in Journalism at Hillsdale College in spring 2013.

Initially, Mark worked as a disc jockey. Later, he became the musical theatre critic at the newly established ‘The Independent’ in 1986.

Next, he was appointed film critic for ‘The Spectator’ in 1992. Afterward, he began focusing on political commentary and wrote a column for The Daily Telegraph.

Furthermore, Mark has written for a wide range of publications. Some of them are Jerusalem Post, Orange County Register, Chicago Sun-Times, National Review, The New York Sun, The Australian, Maclean’s, The Irish Times, and National Post, among others.

In addition, some of his books are ‘Broadway Babies Say Goodnight: Musicals Then and Now’, ‘America Alone: The End of the World as We Know It’.

Mark also has contributed to the center-right blog Ricochet.com. Additionally, he has also recorded numerous podcasts with the organization.

He has guest-starred in ‘The Rush Limbaugh Show’. In addition, he also hosted the “The Mark Steyn Show’ from December 2016 to February 2017.

Mark received the Henry Salvatori Prize in the American Founding at the Claremont Institute. Next, won the 2006 Eric Breindel Award for Excellence in Opinion Journalism.

Similarly, he received the Center for Security Policy’s “Mightier Pen” award in 2007.

Mark has not revealed the information regarding his salary and net worth.

However, in 2018, he won a $4 million case against the company that canceled his online talk show

Mark has been part of several rumors and controversies throughout his career. Controversies surrounded the article “The Future Belongs to Islam” which Mark wrote in 2007.

Violation of human rights was the main accusation. Additionally, further complaints were filed with the Canadian Human Rights Commission and the British Columbia Human Rights Tribunal.

Next, Mark also became a part of a defamation lawsuit in July 2012. Furthermore, Paul Wells accused him of dramatically exaggerating the rise of fascist political parties in Europe.

His writings have brought several unwanted controversies along his way. However, Mark doesn’t plan on stopping what he does best.

This is because he has not revealed the information. His hair color is light brown and his eye color is brown.

Mark is quite active over social media. He has a huge number of followers on social networking sites such as Facebook and Twitter. He has more than 227K followers on Twitter.