Mark Wiens is a married man. He gets married to an incredible cook, traveler, and vlogger, Ying Wiens.

In July 2013, the beautiful couple tied the wedding knot at a restaurant in Bangkok. The couple is blessed with a son named Micah Wiens.

As of now, he resides in Bangkok, Thailand sith his family. 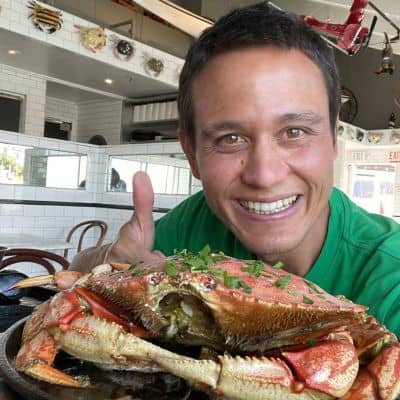 Who is Mark Wiens?

He is best recognized for his self-titled YouTube channel related to food and travel where he has over 8.26m subscribers to date.

Mark was born on February 26, 1986, to a Chinese mother and an American father. He hails from Phoenix, Arizona. According to his birth date, he is 36 years old as of 2021. His Zodiac sign is Pisces.

He hasn’t yet shared anything about his parents and siblings in the media. Talking about his academic background, he was home-schooled for three years in the Democratic Republic of Congo.

Later on, he went to an international Christian school (Rosslyn Academy) in Nairobi, Kenya from where he graduated in 2008. He then enrolled at Rosslyn Academy and also took classes at Glendale Community College for a year.

In 2008, he obtained a bachelor’s degree in Global Studies from Arizona State University. Further, he is of American nationality and belongs to the Asian-American ethnicity.

During Mark’s university years, he worked as a full-time seller on sites like eBay and Craigslist. Since he was young, he is fascinated with food. While he resided in Congo, he would go into the jungle and try out wild fruits, berries, and even insects. In early 2009, he decide to start a blog. During the time, Migrationology.com was born, a website where people who love to eat and travel come to experience and get a flavor of delicious food across the world from different cultures.

He also started the blog eatingthaifood alongside his fried Dwight Turner. Similarly, he made his first e-book, Eating Thai Food Guide. He has also a self-titled YouTube channel where he uploads content regarding street food videos, travel vlogs, and plenty of Thai food videos. Wiens regularly post on Sundays and Wednesdays at 8 pm Bangkok time (GMT+7). As of now, he has more than 8.26m subscribers on his channel. He has uploaded more than 1.1k videos to date.

Mark has never been part of any sorts of rumors and controversial matters that create a huge buzz in the media. He has managed to maintain a clean profile to date.

According to the social blade, she earned in the range of $81.3 thousand to $1.3 million from his main YouTube channel.

His precise net worth and other earning are still under review.

Although Mark is a food vlogger, he has a lean body physique with a towering height. He stands at the height of 6 feet 1 inch tall and his weight is about 64 kg.

Likely, he has a brown pair of eyes and brown hair color.

Besides Youtube, Mark is active on Instagram under the username @migrationology where he has more than 1.3m followers.

Similarly, he has over 39.5k followers on Twitter and 4.2m followers on Facebook. He is also active on Tiktok with nearly 427.2k followers.

Further, she has also shared his email id [email protected] for any business inquiries.