Mark Wright is an English television and radio presenter. He is also a model and has appeared in the first three series of ‘The Only Way Is Essex’. Previously, he was a semi-professional footballer.

Mark Wright initially dated British Reality TV Contestant Lauren Goodger from 2001 to 2011. In 2011, he was involved in relationships with Lucy Mecklenburgh and Sam Faiers. In 2012, he dated British actress Emily Atack, and Zoe Hardman.

Currently, Wright is a married man. He is married to British actress Michelle Keegan. The pair married on 24th May 2015. Previously, they were engaged for 1 year. 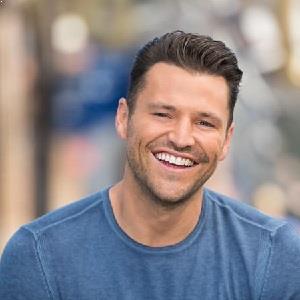 Who is Mark Wright?

Mark Wright is an English television and radio presenter. He is also a model and has appeared in the first three series of ‘The Only Way Is Essex’. Previously, he was a semi-professional footballer.

He was initially interested in a career in football but later turned to the entertainment business. He is of British nationality. Additionally, there are no details about his ethnic background at present.

Talking about his education, there is no detailed information about Wright’s educational background.

Wright initially played youth football for West Ham United, Arsenal, and Tottenham Hotspur. However, he became intrigued by the world of show business and hence he appeared as one of the original cast members in the ITV’s ‘The Only Way is Essex’.

Some other television series that Wright has appeared in are ‘The Royals’, ‘Murder in Successville’, ‘Lock, Stock…’, ‘Extra’, ‘Loose Women’, ‘The Dengineers’, ‘Strictly Come Dancing’, ‘Surprise Surprise’, ‘This Morning’ and ‘Mark Wright’s Hollywood Nights’ among others.

Furthermore, he has not been linked with any award nominations to date.

Wright has not revealed his current salary. However, he has an estimated net worth of around $4 million at present.

Wright became part of a controversy after he showed support for Donald Trump’s opinions on the British terror attacks.

Additionally, his picture with Piers Morgan, which he posted on his Instagram account also received criticism from various people. At present, there are no rumors concerning his life and career.

Talking about his body measurement, Wright has a height of 5 feet 10 inches (1.78 m). Additionally, he weighs around 85 kg.