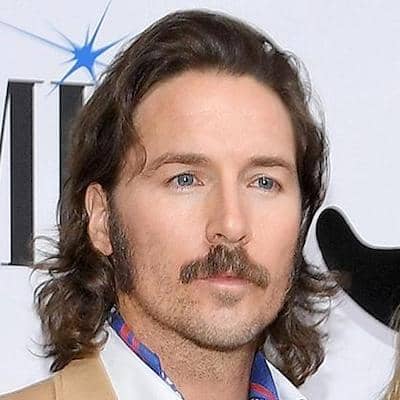 Mark Wystrach at present is in a married relationship. He exchanged vows with Ty Haney on 08 Oct 2019. His wife is followed by over 92k people on Instagram.

Before getting married, they dated for few years and in May 2019, he proposed to Ty. This lovely couple welcomed their first child in Nov of the same year.

Who is Mark Wystrach?

Mark Wystrach is an American singer, songwriter as well as actor. He is currently with a band named Midland as its lead singer.

He acted in Just My Luck (2006), Scavengers (2013), Kamen Rider: Dragon Knight (2008), etc. Also, his upcoming project Hollywood Photoshoot as Mark is under post-production and The Eyes of Tammy Faye as Gary Paxton is completed.

His birthdate is 17 Dec 1979 and he was born in Sonoita, Arizona, United States. But the name of his mother plus his father is unknown.

Mark’s ancestry is Caucasian and regarding his academics, he passed out from Salpointe Catholic High School in 1998.

Mark Wystrach as a singer is with an American country music group, Midland. It was formed in 2010 and its debut album was On the Rocks (2017).

Its other musical projects are Let It Roll (2019), Midland (EP), The Last Resort (EP), etc. Similarly, some of the singles are Drinkin’ Problem, Make a Little, Burn Out, and Sunrise Tells the Story.

Mark is also a popular face of the entertainment world who has appeared in several TV plus movies. His debut TV movie was titled The Retrievers that was released in the year 2001.

As of 2021, he has an estimated net worth of around $500k US. The yearly salary from his acting journey is not recorded.

This singer/actor is keeping himself away from rumors and desperate scandals.

Mark Wystrach’s height and body weight are average. In addition, his eyes are blue and his hair is in dark brown color.